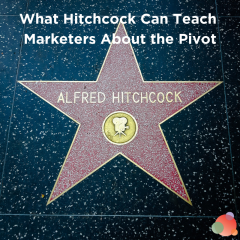 In the movie Hitchcock, there is a scene where Alfred himself is lamenting to his wife, Alma, that no one wants to make the movie Psycho because it was a large departure from his previous movies.

Though he suggested an inexpensive budget and a fast timeline, Paramount Pictures still rejected him, claiming their sound stages were booked, though the industry was in a slump.

So Hitchcock and Alma, while sitting by the swimming pool in their backyard one afternoon, discussed the pros and cons of making such a movie, particularly without a movie studio behind them.

As they laze by the pool, he builds the case for going back to making the movies the way they did when they were younger—by putting everything at risk, making a pivot, and going for it.

He looks around their property and suggests they should make the movie themselves.

It would, of course, mean putting everything at risk.

Alma says, “Even the swimming pool?”

Even the swimming pool.

They jointly decide to put it all at risk and go back to studio executives to describe their pivot.

The Hitchcocks will personally finance the project and film it at Universal, if Paramount will simply distribute.

Everyone agreed to this arrangement and the movie was made.

Psycho, of course, was one of Hitchcock’s best movies.

He and Alma not only didn’t have to give up their swimming pool, it was nominated for several awards (though it never won an Oscar) and is considered one of the greatest movies of all time.

When It’s Time to Put It All At Risk

I tell this story because it’s a fantastic entrepreneurial story (and an even better movie, if you’ve never seen it).

Here is a couple who is fat and happy.

They’re accustomed to getting their way in Hollywood.

Hitchcock has already earned respect and a reputation.

Everyone told him no.

The movie couldn’t be made.

But he wouldn’t take no for an answer and he found a way.

The pivot he made was to risk his family’s entire livelihood because he knew he was right…and it worked.

It was calculated and it was based on years of experience, but it was still a risk—something a good majority of business leaders aren’t willing to do.

Joe Thornley, Martin Waxman, and I just had a conversation about the death of radio.

(It airs on Inside PR next week.)

It’s the same thing that happened to BlackBerry and Blockbuster and media sites and now radio.

Blockbuster is a really great example of what not to do.

They saw the change coming with Netflix and Amazon and Hulu and Redbox, but they stayed their course.

They never veered from their 30 year strategy, which was built to rate the popularity of its older films and immediately check the availability of new releases.

By 2002, the video-renting giant had more than 8,000 retail stores, but was soon faced with increasing competition from Netflix.

Rather than launching a video streaming service then, they refocused on their retail stores, a decision that landed them into bankruptcy just eight years later.

By the time the DISH Network bought them out of Chapter 11, they had only 1,700 stores remaining.

Then all 1,700 of those stores went out of business.

Blockbuster had the opportunity to buy Netflix in 2000, develop video kiosks before Redbox, and even had the inventory to beat other video streaming organizations to the punch.

They did none of these things and instead focused on the investment they had made in the stores, a decision that kept them fat and happy for a while, but eventually failed completely.

They didn’t take a calculated risk that would allow them to pivot and stay in business.

It’s important to stay on strategy, of course, because it’s very easy to be distracted by the shiny, new penny.

But when your strategy is wrong—even just a little bit wrong—it’s time to pivot and not ignore external factors that are changing the game.

If you’re Blockbuster and you see Redbox and then Netflix coming on to the scene, do you double down on your strategy or do you test some kiosks and streaming?

(I think we know the answer to that question. It was rhetorical.)

As you go about your day and you think about the changes happening in the industry, how can you use that information to make informed decisions about your strategy?

And it’s not just if you run a business. It applies to your communications or marketing plan. To your customer service. To your HR. And to your sales.

Think about what Hitchcock did: he knew his strategy was right, but he couldn’t find the investors. So he pivoted his idea, took some risk, and made it a success.

It’s scary to do. In some cases, you’re changing everything that’s worked in the past.

But if Blockbuster had paid attention to external factors, made the hard decision to close some of their stores in lieu of testing a mail service and streaming, and focused on the future, who knows where they would be today.

Most likely not completely out of business.

And now it’s your turn…how can you fail fast and pivot your business and/or strategy?