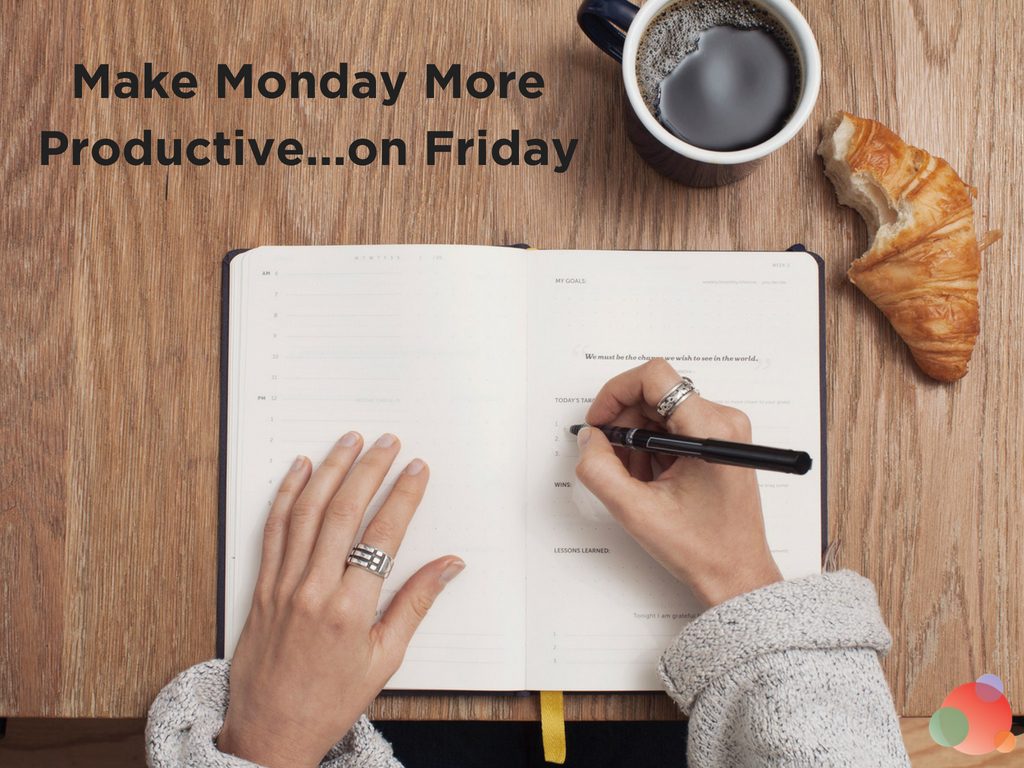 Of course, you may say, “Gini, I don’t need preparation for Friday. I’m prepared for it by Saturday every week.”

But trust me when I say that you need to be prepared for Friday.

This is because an Accountemps survey found only three percent identify Friday as their most productive day of the week.

It comes as no surprise.

In my unscientific research of the Spin Sucks community, NO ONE works on Fridays. At all.

It is crickets. You post something and you may get three or four responses, compared to hundreds during the rest of the week.

Of course, that will change once school starts again, but it is pretty surprising to see how few of us use Fridays to prepare for the forthcoming week.

A recent article on Quartz talks about this phenomenon and offers five things to do on Friday afternoons:

The sixth is mine, which I’ve added because we all say we don’t have time for exercise.

With the slow summer months and your Fridays being a bit lazy, this is the perfect time to make exercise a habit.

By the time fall rolls around, it will be a priority.

Let’s explore each of these.

Plan Ahead and Prioritize

Devote at least one hour on Friday afternoon to plan for your forthcoming week.

Use this time to prioritize and create your hit list of things to accomplish on Mondays.

I use Wunderlist for this.

Also, because Mondays and Tuesdays are my big meeting days, I know I have to be very selective about what’s on my list for those days.

They have to be things that will prepare me for Wednesday, but also not keep people waiting.

For instance, I always record the Spin Sucks podcast on Monday afternoons, but I do all the prep work on Fridays.

If I don’t get the prep work done on Friday, I can’t record on Monday because I don’t have the time to prep and record.

Use Friday afternoons to prepare yourself in that way—and be realistic.

Use the Two-minute Rule

How many of you have a to-do list with things that get moved from day to day?

I hate to admit that I do. There are LOTS of things that get moved during the week because I just don’t have time.

Answering emails is one of those things.

I used to be a big Inbox Zero person. Now I can barely be an Inbox 500,000 person (that’s an exaggeration).

But there are plenty of emails in there that need just a few minutes of my time each—emails that I can use Friday afternoons to catch up on.

The two-minute rule is doing the things that will take you just two minutes each.

Friday afternoons are the best time to do this because you can get quickly through 30 or so items (two minutes each in one hour) and get them off your next week’s list.

Also, you will feel so much better. You’ll have earned your weekend, for sure.

Take a look back at your week and identify what fell through the cracks—and what still needs to be done.

Because Friday afternoons are not your most productive, don’t panic.

Use the time to think about what you’ll realistically be able to accomplish in the forthcoming week.

One of the things we do internally is list our top three priorities for the day, at the start of every morning.

This helps us hold one another accountable and it also allows me to see where people are struggling to get things done.

Use your Friday afternoons to look at your daily lists from the week and figure out where you struggled.

And use that time to break bigger projects into smaller ones so you don’t get stuck in the forthcoming week.

I don’t know about you, but I am the worst procrastinator in the world.

If I have a deadline, I will get it done. But if the deadline is arbitrary or six weeks from now, it just is not a priority.

So one of the things I do on Friday afternoons is start on the projects that are gigantic and not due yet.

For instance, I have a huge project I’m doing with PRSA so I spent a Friday afternoon a few weeks ago, breaking that project down into easier-to-accomplish smaller to-dos.

It has allowed me to get something done on it every day, and it will be ready by its due date.

Had I not done that, I truly wouldn’t have started on it until the week it was due…and it’s a good six-week project so that wouldn’t have worked.

Take your Friday afternoons to identify big projects coming up, conversations you have to have (but may have been avoiding), or a presentation you have to give in a few weeks.

Getting it started will make it lots, lots easier to get back into it on Monday morning.

You may even find you’re excited to get back into it.

This is a debate we have often—and Mike Connell even turned it into a Big Question.

In the 13+ years that I have run a business, I have found people are far more productive when they unplug.

In fact, I force people to take unplugged vacations, much to some of their chagrin.

But every time, they come back far more productive, relaxed, creative, and recharged.

You may love what you do. It may be easier to just keep your finger on things on weekends and during holidays. But it’s not productive.

If you use your Friday afternoons to prepare yourself for the forthcoming week, there is no reason you need to work on the weekends.

Use the time to be present in other parts of your life and to recharge your brains.

I promise you you will feel better come Monday and the start of your week will be far more productive than before.

And last, but certainly not least, use Friday afternoons to exercise.

Of course, you should be using every day to exercise, but Friday afternoons allow you to jumpstart your weekend warrior status.

During the summer, we close the office at 1 p.m. on Fridays.

Some of us use that time to get caught up without interruption and others of us just start the unplug process early.

I use that time to get a two-hour ride in.

No one misses me at work and it doesn’t take any time away from my mini me during the weekend.

In fact, it allows me to have a rest day on Sundays, which means I can sleep in and hang out leisurely with my family versus sprinting out of bed at 5 a.m. to be back by 8 a.m.

It’s far, far more productive for me and I get a good 50 miles in on my bike.

After you’ve planned for your forthcoming week, use the extra Friday afternoon time to get some exercise in.

You will not regret it.

Now You Know What to Do…Go Do it

Now you know what you have to do this Friday—and every Friday after it.

Even if you do only one of these things to start, your forthcoming weeks will be far more productive.

I’d love to know if you have anything else that makes your weeks more productive or, if you try any of these things, how it goes for you.

The floor is now yours.

Photo by Cathryn Lavery on Unsplash