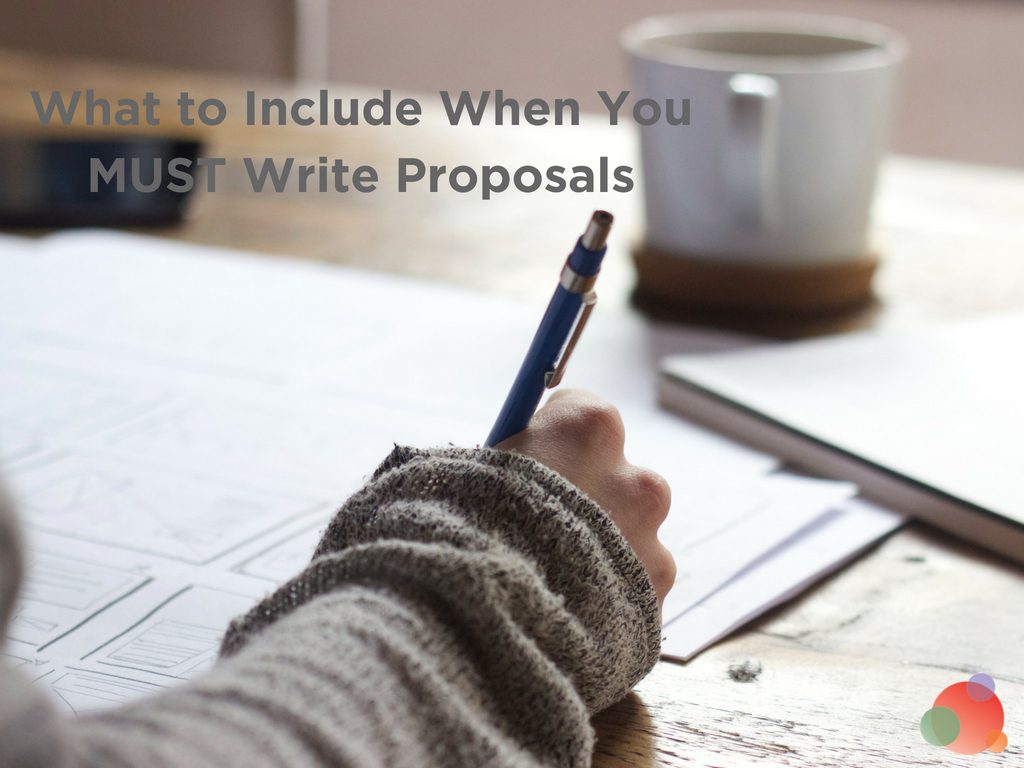 I am not a big fan of proposals.

In fact, I find proposals to be a huge impediment to getting new clients.

I avoid writing proposals whenever I can. But I know lots of folks do write proposals. And there are certain situations where you need some sort of document to gain approval.

Many corporate, governmental, and NFP institutions need a proposal before they can make the hire. They may need multiple bids, or—because no one person can make a decision—the proposal is going before a committee.

So, there are times when writing a proposal is necessary to get the work.

If you must write a proposal, then write one that’s simple and straightforward using these five elements.

You need your audience to know you hear and understand the issue.

You can do this by restating the problem.

It’s important to put the summary into the words they use; don’t wrap it up in big technical terminology or fancy jargon.

Use the same words they use to describe the situation in which they find themselves.

If they can see that you understand the problem, they’ll believe you can solve it.

So restating the problem is critical.

The client isn’t hiring you just because they have a problem they want to go away.

They also want you to take them somewhere beautiful.

So be sure to describe their desired future state of things.

Once we work together, angels will be singing, unicorns will be frolicking, and leprechauns will be handing you buckets of gold.

The client needs to see a compelling vision of the future that will be theirs once you complete your work together.

Ask them, and they will tell you how to describe this future.

Remember: the proposal is not where you prove your expertise.

They’ve called you because they already believe you’re qualified.

They don’t need to hear how you are going to solve their problem (because that’s boring).

I’m amazing at this, and my process, while unique, is the same as every other proposal in front of you…

A detailed, technical description of your methodology will not convince anyone to hire you. So leave it out.

Okay, you’ve summarized the problem and described the amazing results of your work together; now it’s time to talk money.

Cost is the part of the proposal that everyone flips to first.

Don’t hide it in the back, put it right up front.

But, never give them just one number.

When walking into an Apple store, you see more than one phone.

I don’t know about you, but I usually start out with a small phone with less memory. Then, I look at the bigger phone and think, “It’s just $100 more…”

This results in choosing a memory upgrade, and pretty soon I’ve spent $500 more than where I began.

Most proposals have one price.

The unspoken message is:

This is my price, take it or leave it.

Maybe there’s some negotiating room, but the negotiation is only about how much your service costs—not about how it gets done.

The question, “How much is this going to cost?” should always be answered with, “It depends.”

There’s always more than one way to do the job, right?

There’s the way your low-ball competitor would do it. You know that company; they’re always cheap, and we look down on their process.

They skip steps and use inexperienced people. But, they have clients.

There are people who choose this.

But what about the ultra-high-end competitor who charges massive rates and does everything for the client (who never lifts a finger)? You can be sure this prospect isn’t going to choose them. (Or will they?)

Instead of trying to read the minds of those you didn’t meet (you’re writing a proposal because you couldn’t meet all of the decision makers) why not propose all three?

Then create a high-end offering, with senior people and all the bells and whistles.

Present these two costs, along with your standard offering, and let them choose.

But what if they choose the low-end offering?

Well, that’s better hearing “No,” isn’t it?  And it’s better than your low-end competitor getting the deal instead.

You can bet that the number who choose the low-end option will probably be the same as those choosing the high-end option which includes everything.

Providing different options does a couple of things.

Number one, it puts your price in context. Your prospect may not know what your services should cost, so providing three options gives them context.

Also, when you create your low-end and high-end options, you’ll include and exclude things from each.

Many clients will want the middle option, and then they’ll come back and say:

But we want unlimited phone calls with the principal.

To which you’ll tell them:

Oh, the high-end option includes that, but you didn’t choose that option.

It gives you greater leverage when negotiating.

So offer them different options—two, three, four. But never offer just one.

Include a Signature Line

There may be instances when a prospect likes your proposal but isn’t sure how to proceed.

You follow up with them, “Hey. What did you think of the proposal?”

They reply, “Oh. I thought it was great.”

You could turn it into a contract, but that would involve lawyers. And this isn’t necessarily a contract. It’s more like an agreement leading up to a contract.

Be clear, so they know precisely how to commit to moving forward.

Congratulations, you’ve agreed to a price.

Are they paying you now? Sometime in the future? Monthly?

Lots of proposals request a deposit, maybe one-third down now, one-third midway through the project, and one-third upon completion of work.

Why are you waiting until you’ve spent 100 percent of the cost before you get 33 percent of the revenue? For most projects, ask for the whole contract payment up front.

But if I ask for it all, surely they won’t pay it.

Maybe, maybe not. So negotiate.

Wouldn’t you rather begin negotiations by asking them to “pay it all up front”?

They may balk and say:

And if that happens say:

Great. How about paying 60 percent now and 40 percent upon completion?

The point is, get more money upfront.

Now is the time when they like you the most; get as much of the fee now as possible!

How Do You Write Proposals?

So that’s how I write my proposals. But truthfully, I get 95 percent of my business without ever writing a proposal at all.

There’s a process and a method to it.

And now I ask you…how do you write proposals?

Photo by Green Chameleon on Unsplash

As principal advisor at Anchor Advisors, Brad Farris guides business owners through the pitfalls and joys of growing their business. Brad is passionate about business and helping business owners find better ways to do things, make more money, and enjoy life more. Brad also records a podcast at BreakingDownYourBusiness.com.

View all posts by Brad Farris