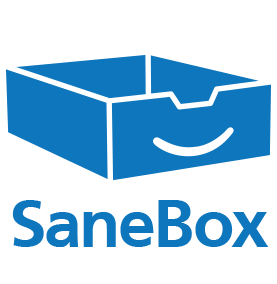 I have found the most amazing tool and you are not only going to want to marry it, you’ll want to kiss me for introducing you to it.

First of all, email is the bane of my existence. It is impossible to keep up with, no matter how hard I try.

If I keep it at Inbox Zero—which, to me, means answering what can be answered, deleting what doesn’t need to be there, and moving everything else to a to-do list—I easily spend 12-15 hours a week.

That is just not acceptable, yet if I don’t spend that kind of time, it piles up and I miss deadlines.

Dawn Buford and I have gone round and round about what to do about it and we’ve tried everything every expert has recommended.

And so it all piles up and then, one Friday afternoon, you dig into it and look up nine hours later.

That’s why, when I found SaneBox a couple of weeks ago, I figured it was worth a try.

At this point, it certainly can’t hurt.

I mean, I somehow got subscribed to a list as “Dannette” so I can always tell when my email address has been purchased.

learn what email is important to you and filters out what isn’t — saving you hours.

It has one-click unsubscribe, which means you just move the email from your inbox to a folder called “black hole” and you never hear from the sender again.

It has response tracking, which keeps a folder of emails you’ve sent that haven’t received a reply. And then it alerts you after a few days to resend the email.

And it allows you to snooze non-important emails. You drag it over to a different folder and it will put it back in your inbox when it’s convenient for you.

The best part about it is it works with any email server, not just Gmail.

I figured it was worth a shot so I took their free trial.

How Does it Work?

After about a day of analyzing my entire inbox, it created five new folders in my inbox: Sane BlackHole, SaneLater, SaneNextWeek, SaneNoReply, and SaneTomorrow.

As of this writing, there are 118 emails in my SaneLater inbox, which will allow me to later go in and organize them. I will likely pull most of them over to the BlackHole folder and never hear from them again (and no more baby rabbits!).

But the best part is, even after a day of meetings yesterday without access to email, I have only 21 messages in my inbox that need tending to.

Imagine if I had 139 in there because all of those SaneLater emails were in my inbox. It’s not hard to imagine because that’s where it was a month ago…and it likely is the same for you.

That begins to become overwhelming and makes me want to cry.

Sure, there are emails in the SaneLater folder that will need to come to my inbox, but not all 118 of them.

Not only do I know those aren’t super urgent, but I can “train” them later, like when I’m on the El or on a plane before the door closes.

The only things hitting my inbox are emails from clients, from our online students, from Spin Sucks subscribers, and from partners and vendors.

How Do the Digests Work?

The other thing I love about it is it sends you a digest and says, “We went ahead and put these emails in these folders, but if you disagree, you can move them.”

And, with the click of a button, they’re either sent to the BlackHole or moved elsewhere.

You also can undo anything that you mistakenly sent to the BlackHole. So don’t panic if you suddenly remembered why you had subscribed to something and now you can’t get it.

It’s the click of two buttons and it comes back.

How Much Does it Cost?

For those of you who bill your time for a living, it’s a no-brainer.

In my first week, it told me it saved me 11.6 hours. That’s time I can now spend working on things that make us money.

Even if I bill only half of that now available time, I make the company an extra $2,320 per week.

So you can see the return-on-investment is pretty significant.

I highly, highly recommend you check it out.

If you don’t love it as much as I do, no harm, no foul. It didn’t cost you anything and likely saved you a few hours and a few annoying emails.

Let me know what you think!

P.S. The free trial links I used are affiliate…we both get $5 off if you love it and buy it.

Seven Tips for Communicators to Prepare for What’s Next