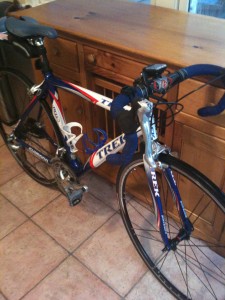 I know this has nothing to do with PR, marketing, or anything digital, but it’s important to me. And, I figured, it’s a holiday in the U.S. tomorrow and Canadians are coming back to work today, so I don’t think you’ll mind.

For those of you who don’t know, I’m a pretty avid cyclist. I’m not one of the best, but I definitely can hold my own. I ride nearly every day, no matter if I’m traveling or have the comfort of my fitted Trek Madone 5.2. I got my love of cycling from my dad. I started out running marathons, but didn’t really love it. I had severe asthma when I ran and I had to force myself out there. The I had my knee scoped twice and the doctor politely suggested I find something else to do.

So, eight years ago, I followed my dad, switched sports, got a coach, and started riding. The first time I rode with clipless pedals, I fell over and cut my leg open so badly I should have gotten stitches (big scar there now). But that didn’t deter me! I got right back up and tried again. And that was all she wrote.

It’s been a particularly good riding season this year. Maybe it’s because it was warm enough to be outside in March (unheard of) or because I switched from riding at 5:30 a.m. to noon. It’s a fantastic way to clear your head in the middle of the day and I’m sporting a serious (but ridiculous) cycling tan.

After writing a book last year (cough, Marketing in the Round, cough) and not getting out as much as I like, I’m in racing shape again this year and have fallen back in love with my bike (I would marry it, if I could).

But, as much as I love it, it’s reminded me of what jerks people can be in their cars. Just yesterday, I was in the freaking bike lane and a guy in his SUV, without turning on his signal or giving me any indication he was going to turn right, came into the bike lane to turn, as I was going straight. If it had been three seconds sooner, he would have hit me.

My biggest fear is I will get doored because no one looks in their side mirror before opening the door of their parked car into the bike lane. I have these visions of my riding right into someone’s door and coming off my bike over the hood of the car. It scares the crap out of me.

So, with that in mind, I’ve put together some tips for watching out for cyclists this holiday week:

I know some of you will say, “But Gini, cyclists don’t follow the rules of the road.” Yes, I know. It kind of makes me nuts to see guys (I’ve never seen a woman cyclist do this) weaving in and out of traffic and going through red lights. I’ll write a blog post for them next.

Some of my cycling friends will have additional tips, which I’ll ask them to leave in the comments below.

In the meantime, be safe. Have a good holiday (no blog post tomorrow!). And watch out for cyclists on the road!