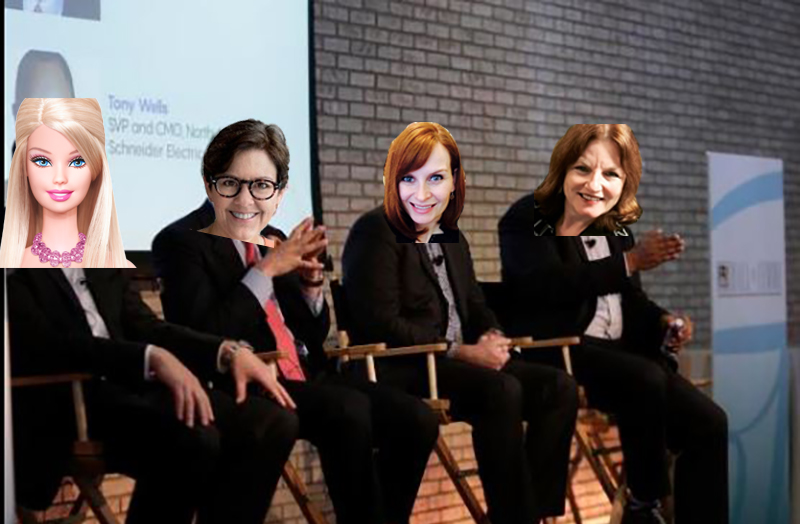 My friend Bob LeDrew tagged me, Gini Dietrich, Ann Handley, and a few others in a Facebook post last week about the PRWeek “Hall of Femme.”

It’s an event where women in the PR industry are recognized and honored.

Bob asked, “Do you know any women who might have been able to speak up at this panel?”

Reading the story, I saw his point; the panel to discuss how woman can get ahead in their careers was made up entirely of men!

That got me wondering…what if we had an all female panel for the Hall of Men event?

(What follows is the PRWeek story almost verbatim. Only the names and genders have been changed.)

WomanSplaining: Speak Up to Be Heard in Girly Culture!

If men don’t feel their voices are being heard in the communications world, they need to speak up more loudly, said Arment Dietrich CEO, Gini Dietrich at recent Hall of Men event.

The leader of the world’s most popular PR blog, Spin Sucks said it might sound “silly” to give adults the advice to “speak up,” but it is a “learned behavior” with which even professionals in their 40s struggle.

Dietrich recalled that she recently asked men on her executive team why they are quiet during meetings.

Their response: It is because of the room’s “girly culture.”

“I asked them, ‘How are we going to fix that? Either you’re going to speak up, or I’m going to have to hammer the gals,’” said Dietrich.

She also advised that men should not let others drown them out “just because they are women and talk loudly,” adding that if there is a problem, it should be corrected by management.

Speaking up can also get men opportunities they might otherwise miss.

Another panelist, Sherrilynne Starkie, president at Thornley Fallis Communications, said one staffer recently approached her and laid out his background when the company kicked off a strategic initiative.

“He said, ‘You may not remember, but I have worked in TV news, I have been at a PR agency, I have corporate experience,’” she recalled.

“I had forgotten about that; I didn’t have as much exposure to his background. He got the role and took over the job.”

Starkie said she would not have considered him for the role if he didn’t make his case.

Panelist Ann Handley, head of content at MarketingProfs, also shared a story about a male coworker who stood up at a leadership meeting and challenged the company’s paternity-leave policy, which he described as “atrocious.”

As a result, Handley said, the company has a new and improved policy.

“My point on this is speak up, be visible, be vocal,” said Handley.

“When something is not right, let people know, because change is good.”

To ensure pay parity and career advancement for men, Dietrich’s advice is to set specific benchmarks for the number of men in senior management.

“You have to reject the stereotypes like, ‘He is too aggressive; he doesn’t know how to get along with people.’”

Company leaders also have to make sure men are asked—at all—if they want a certain opportunity.

“Don’t make an assumption, for example, that a man won’t move his family to Singapore for a global role,” Dietrich added.

Handley said her company has a policy of making staffers declare whether they are open to a physical move or to moving into a management position.

It does not make assumptions based on whether they have children, for example.

Dare to dream PR pros…maybe someday this will all come true.

NB: Thanks to Stacey Diffin-Lafleur, my most trusted editor, who attempted, in vain, to improve the copy above.

I didn’t let her make any changes to the italicized text because I wanted to keep the verbiage faithful to the original article…warts and all.