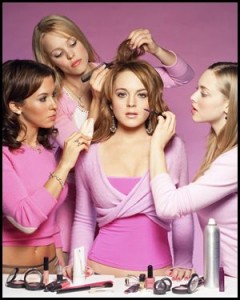 “The most common way people give up their power is by thinking they don’t have any.” – Alice Walker

There is a very interesting debate happening online. It’s being highlighted with the Miss Representation Sundance film about media being derogatory to women.

The trailer shows media talking about Hillary Clinton “looking haggard and 92.” It shows a clip of Sarah Palin being asked by a reporter if she has breast implants. It shows a panel of men on a Sunday morning news program where they’re talking about Nancy Pelosi and whether or not she’s had plastic surgery. And then it shows Marc Rudov saying the only downside to having a woman in the Oval Office is the “PMS and mood swings.”

The most powerful women in America are being shut down, based on their looks and not on their intellectual capabilities.

Imagine if the same conversation happened around men.

President Obama, you have rock hard abs. Are those implants? Surely you don’t have enough time to exercise while running the country.

Marc Rudov, you seem to be concerned only with sex and a woman’s place with it. Can we take this to mean you have a small… glove?

How can we be taken seriously when it’s all about the body and not about the brain?

As a culture, women are brought up to be fundamentally insecure. We worry about our weight and when we can start wearing make-up and getting our ears pierced and the kinds of clothes we wear.

But this is short-changing our intellectual capital, our brains, and the voices that are needed in public forums. As a society, we’re not standing for the right value and principles. And the media is making it pretty clear what people should admire about women.

Here’s the thing, though. We’re our own worst enemies. In more than half of the clips the Miss Representation video uses, the comments are coming from other women.

We’re catty, we’re mean, and we’re judgmental. We treat one another poorly and we rarely support one another.

How can we expect men to treat us with respect when we don’t do it?

If we want things to change, it has to start with us. The next time you are faced with making a snap judgment about another woman, think twice. When you decide not to support a woman-owned business, I hope it’s based on lack of merits and not because it’s run by a woman.

Support one another. Be kind. From there change will happen.