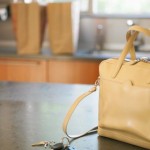 How many of you received a message through Facebook asking you to post where you like to keep your purse as a status update to help raise awareness of breast cancer?  How many of you made the status post?

Men, were you wondering what was going on on Facebook when you saw updates such as “I like it on the kitchen table?”

Last year to raise awareness of breast cancer, women were asked to post the color of their bra, ultimately getting their friends to ask them what it was all about.  It turned out to be a big success as women around the world were posting colors for more than a week.  But to repeat the campaign not even 12 months later, you have to ask, what is this doing?

Similar to my last post a few weeks ago on the I Love Boobies campaign, asking women to put sayings such as “I like it on the floor” gives sexual meaning to anyone not in the loop on the mystery message.  The issue I am having is that yes, the first time around it was cute and did spark awareness for some new Facebookers, but I can’t image this copycat campaign reached more than the original.  So the question is, isn’t it about time to make change and start asking for donations?  Or if you start asking for donations, does your engagement go down?