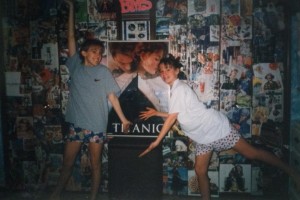 When I was in middle school, a couple girlfriends and I started collecting the “Got Milk?” ads out of the Seventeen magazines.  They were the best ad campaigns we had seen. We collected these ads; pictures of celebrities such as Jonathan Taylor Thomas and the cast of Friends all with white foam on their upper lip, and we decorated our rooms with them.

Isn’t that every marketers’ dream? To have your target market literally decorate their bedrooms with your ads?

The funny thing is, more than two decades later, this campaign still resonates with all generations. Until now.

Just last week the California Milk Processor Board (CMPB) launched a new social campaign, “Got PMS?”  The idea is to highlight recent research concluding that the calcium in milk helps reduce the symptoms of PMS.  CMPB and their agency thought they would have some fun with the campaign by targeting their racy ads to men living with women. I have to disagree.

“Are you a man living with PMS?  Is PMS making you live in fear of the thing or things, you did or didn’t do?” are the first things you’ll read on the campaign social site Everything I Do Is Wrong.

The idea of targeting men on a topic that is generally taboo to them, is either genius or a flat out bad idea. I wrote on a similar subject last fall; the I Love Boobies initiative was developed to to raise awareness of breast cancer. And that’s exactly what they did through a racy campaign that sold “I love boobies” bracelets. Not only was it wildly successful in generating conversation, but it also caused some schools to ban them altogether, making it cool for young boys and girls to wear the booby bracelets.

So like the “Got PMS?” campaign, is all press good press?  To mock such a subject just to gain awareness, does that make it alright as long as it equates in sales?

According to the New York Times, “generating “buzz” in social media can be counterproductive if the chat turns out to be overwhelmingly negative.”  But the board is “hoping it will ignite some social media discussion and conversation.”

I can’t imagine, in my teen years, collecting “Got PMS?” ads and taping them to my bedroom door. Then again, cell phones at that time were for rich businessmen who had them in their cars and took over the entire front seat with the box filled with the cord.  And the closest thing to Facebook was the Yellow Book.

I have to say, they’ve lost their connection to me.  Do you think this campaign will resonate and increase dairy milk sales or is it just a cheap shot at gaining conversation? Genius or flat out bad idea?