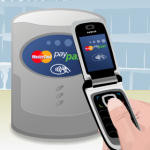 If you have not heard, “the end of credit cards is near!” in some form or another during the past few days, then crawl out from under your rock and read the news, subscribe to some RSS feeds or newsletters, or watch some TV.

We predicted mobile payments here on Spin Sucks last October, then talked about it as a growth area for 2011 earlier this month, and then CNN Money validated our prediction when they announced it earlier this week.  Since then, I’ve been thinking…

Does it excite me that I don’t have to carry around a chunky wallet with my cards in it?  Or does it freak me out knowing that even more of my life is going to be held in one tiny, losable, crashable, breakable, device?  What do think?

I thought the Chase blink feature was amazing and I still get excited when I just “bump” instead of “slide.”

According to a report from Aite Group, “this pay-by-phone market is forecast to make up $22 billion in transactions by 2015, up from ‘practically none’ last year.”

Maybe my fiancé won’t leave his phone in a cab again.  And maybe my friends will be more careful with their phones near any type of water source.  Maybe when my boss runs to the bathroom, I could swipe her phone real quick, pick up the tab, and order me an extra doggy bag?  Oh the possibilities…

Take the poll. Let us know if you think the end of credit cards is near!