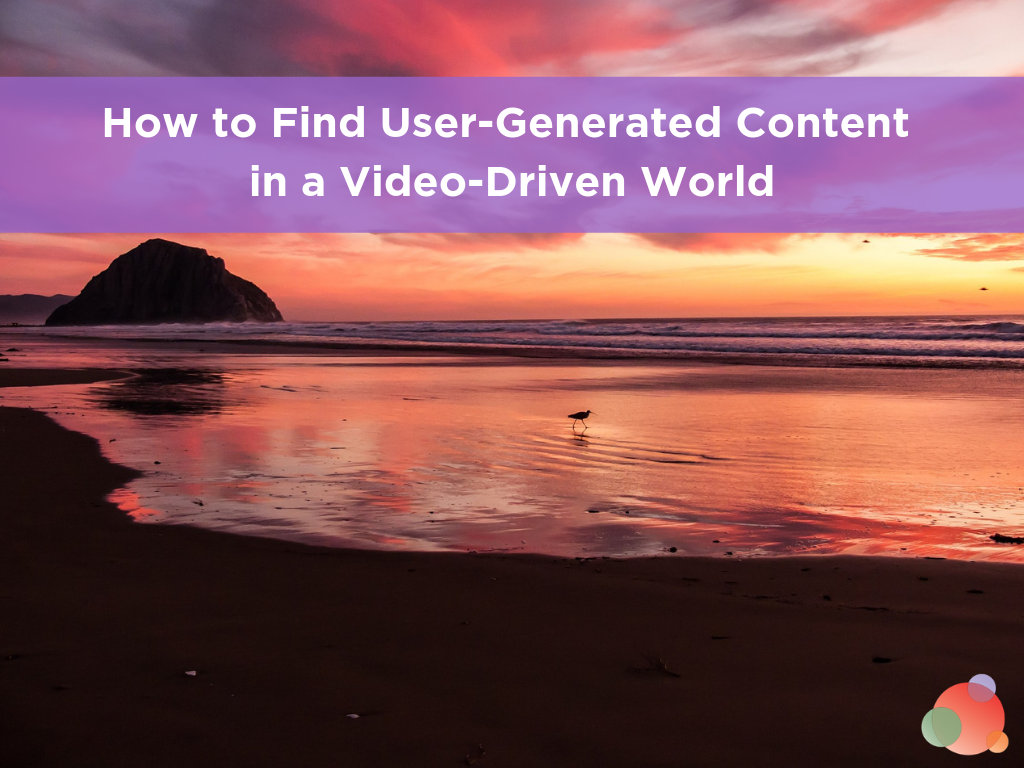 If you’re big into writing content, I have some bad news for you.

The end is nigh.

Or at least, you may find your written content doesn’t have the same impact it used to.

We’re entering the age of video—with 80% of the internet moving to video content by 2021.

You better jump on board the video train, or risk getting left behind.

But if video isn’t your thing—and it isn’t mine; I’d much rather read an article than watch something on the same content—there is a way to embrace the trend, with minimal work on your side.

Gini Dietrich, Spin Sucks CEO, has covered how to include user-generated content (UGC) in your communications plan.

I’m going to delve into how to find it.

Especially when it comes to video.

In this case, we’re not looking to encourage new content creation, but to discover content that has already been produced.

Simply put, there’s a heck of a lot of potential user-generated content for you to use.

You just need to know where to look.

A recent survey found 90% of consumer purchasing decisions are influenced by user-generated content.

What you say about your brand is less important than what everyone else says.

For some brands, video drove 288% more engagement than text or image mentions.

Combine user-generated content with video, and you get a powerfully engaging social platform, that drives consumer response.

Finding a Needle in a Needlestack

So how do you find it?

There are about 29.3 million videos posted across social media channels every day.

If you want to surface just the videos that matter to your brand, you’d spend more time searching than it’s worth.

Instead, this becomes another case where artificial intelligence (AI) can make your role more efficient.

The tech is so new, we don’t have an accepted name for it yet.

Even if the video doesn’t mention your brand in the text.

And what you get is a user-generated goldmine.

UGC—Now You Have It, How Do You Use It?

Reviews are an essential part of the consideration stage in the buying cycle.

Consumers are interested in your products, but they want to get some independent opinions, too.

By finding your own brand reviews, you’re taking the legwork out of your customers’ hands.

They don’t have to search for honest reviews, if you’re providing them instead.

And it allows you to curate them.

That’s not to say you should provide false reviews, or even ones that are only 100% glowing for your brand.

We all know when a review is fair and honest, and when someone has an ax to grind.

Make sure your audience sees more of the first, and less of the second.

Or…you could flip it entirely on its head.

Danish brewer Carlsberg recently ran a campaign in the UK highlighting the negative mentions of their brand online, to help promote their new rebrewed beer.

That’s a brave way to promote a business, and a clever use of UGC.

It’s hard going trying to think of new applications for your product.

Yet, somewhere out there, someone may be using your product in a way you could never imagine.

By sharing this type of content, you can inspire people to think about your products in new ways, or even try them for the first time.

In theory, anyone who creates user-generated content could be an influencer for your brand.

But how do you find people who engage with your brand, but aren’t actually endorsing it?

People who might be open to becoming full-fledged influencers, if they had a nudge in the right direction.

Consider Lucas Rangel, who promoted Coca-Cola on his feed.

We know he likes the product, and he has a strong following (3.6 million followers).

Now that he’s been identified, he could become an ideal influencer.

He would just need to be approached by by the brand, and agree on the parameters of a partnership.

Or, if you prefer nano-influencers as I do, you could look for people who engage with your brand regularly, even if they’re not promoting it, and don’t have large followings.

Do they share videos of themselves enjoying your product, driving your car, or using your tool?

They could be perfect for your next influencer campaign.

Be the Next Video Star

That shouldn’t be a challenge, but an opportunity to engage with your audience in new ways.

You have the chance to find and mold some of the best content across the web, and use it to engage your brand consumers in new ways.

How are you using video to engage with your audience? Share your answers in the comments below.

Image by Free-Photos from Pixabay