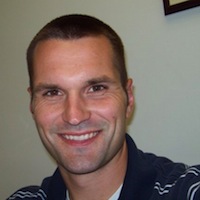 Marcus Sheridan is the author of  the popular blog The Sales Lion.

Yes, I know I should have written you this note quite a while back but I finally had to come to grips with the gross error of my ways when I misjudged your character many moons ago.

You see, it all started when I was told by some social media guru that you were the next big thing. Needing whatever help I could find to sell more swimming pools, I figured I would give you a go. That’s when I put your little symbol up on my company’s website and just waited for the followers to pour in. But do you know what? They never did.

So that’s when I started to judge you, T’. That’s when I began to question your true worth to small businesses like mine. Naturally, because I had such a huge amount of traffic to my site through blogging I figured that many of those same people and customers would want to ‘follow me’.

But alas, they did not. They simply passed over your little button and I was left scratching my head.

But do you know who did follow me, T’? Contractors in my industry—other swimming pool professionals. But honestly, I had no idea how any of these ‘followers’ could help.

I thought you failed me T’, I really did…

Then fast forward to my small business and marketing blog, The Sales Lion. Having had so much success as a small business owner using blogging and inbound marketing to transform my company, I wanted to share the success principles I’d learned with other entrepreneurs as well.

But what drove me crazy T’ is that the more I wrote about marketing ,and the more I connected with other great people, the more I kept hearing mention of your name.

“Twitter this, Twitter that.” You were everywhere. And so I finally figured I would try learning more about you.

But that’s when it got really weird T’. I started hanging out at Twitterland and I realized all of your people had their own little way of saying things. It was almost as if you were another language unto yourself.

One day someone even mentioned to me the usage of these things called ‘Hash Tags’. For all I knew, the person could have called them ‘Hashish Tags’ and it would have meant the same to me. And when I combined all the #’s with all the @’s, well it frankly was an utter mystery.

But luckily T’, there are some good people in the blogosphere out there that care about the both of us and wanted us to have a relationship.

One day I was discussing with my friend Ingrid Abboud at NittyGriddy blog how much I hated your guts. She laughed a little and told me I had just prejudged you. What?? How could this be? Considering Ingrid’s social media greatness, I figured she must be onto something.

But instead of simply telling me I had been wrong about you T’, Ingrid took kindness to a whole new level and sent me a book in the mail called The Tao of Twitter, written by some really smart dude named Mark Schaefer.

Once I received the book, somehow the crazy language everyone speaks over at your place started coming together. The light began to come on. Things started making sense. And for the first time T’, I realized that I may have been wrong about you.

So that’s when I jumped in. I became active. I shared, promoted, talked, and all that stuff. And do you know what T? I liked it. In fact, I liked it a lot.

To close T’, let me tell you what has now happened. Despite the fact that I don’t get followed by many swimming pool customers per se, all the pool professionals that follow me receive any article I write on my blog to their twitter stream. This has proved to be a great method to get contractors talking about and promoting my articles. And do you know what else T’? With all these contractors promoting my blog, it has made a huge difference in terms of inbound links to my website. Pretty cool, huh?

But this actually pales in comparison to the difference you’ve made on The Sales Lion. In fact, last month you brought me nearly 1,000 visitors to my site. And although that may sound like chicken-feed to some (cough– Aunt-cough– Gini), it has been a huge boost to my site. Traffic is way up. Subscribers are now jumping in at large quantities. And more than anything, I’m meeting great people. People that think just like me. People that I now consider to be my ‘friend’.

So I’m sorry T’. I’m sorry I hated your stinking guts. I’m sorry I spoke poorly of you. But from now on, I promise to be one of your biggest supporters, you have my word.

Marcus Sheridan is the author of  the popular blog The Sales Lion, where he has been known to write some pretty passionate stuff about sales, marketing, business, and how to be freaking awesome!