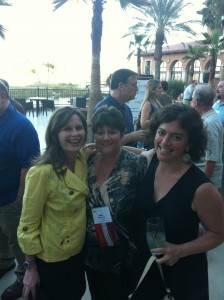 I met Abbie Fink in Naples (Florida, not Italy), gosh, four years ago?

We were there for Counselors Academy and I had flown down a day early to help my co-chair Ben Wheatley with whatever committee we were working on at the time. But, that first night, he had an executive committee dinner and I was stuck, alone, in the hotel.

He suggested I call Abbie to see if she wanted to have dinner with me.

Now, for those of you who know me, you know I’m an introvert. So for me to call a stranger, in her hotel room, and ask her to dinner was HUGE for me.

Abbie quickly became one of my closest friends. She has a way about her that you’re immediately drawn to and a character that makes you want to do your very best.

She is vice president and general partner at HMA, a public relations firm in Phoenix. She is really active in her community, serving on the boards of Scottsdale Leadership, the Boys & Girls Club, and the Phoenix chapter of PRSA. She was this year’s Counselors Academy spring conference co-chair and she is the Phoenix champion for HAPPO.

I’m tired just typing all of that out…I’m going back to bed!

While HMA Time, the company’s blog, is written by everyone on staff, it has some definite themes. On Mondays they highlight a reporter, producer, editor, or blogger who is doing great work. On Tuesdays they provide a tip. On Wednesday they do a “what is” series (I wrote What Is Leadership a couple of months ago). And Thursdays and Fridays are free for alls.

You’ll be doing yourself a huge favor if you get to know one of my in real life BFFs. There is something for everyone!

The photo is of Abbie, Lisa Gerber, and me at this year’s Counselors Academy in Lake Las Vegas. You can tell which one is Abbie by the nametag.