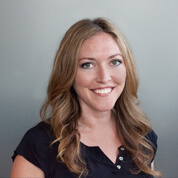 You may not recognize the name Amanda Gant, but you certainly will recognize Orbiteers.

She is the face behind the social media for Orbit Media Studios (which our friend Andy Crestodina co-founded) and she’s a close friend of the Spin Sucks Crazies.

I first met Amanda at the monthly Wine & Web events that Orbit does and we became fast friends.

She organizes those events, was one of the key contributors to Content Jam, and manages all of the marketing and social media for the web design firm. She also has to corral Andy, which – for those of you who know him – is no easy task.

Amanda grew up in Valentine, Neb., which may not mean anything to most of you, but having gone to school at Creighton University in Omaha, I know where Valentine is! They have a population of only 2,800 so you could say Amanda was a fish out of water when she came to the big city of Chicago.

While she is a Nebraska graduate, we’ve never played the “who do you know” game. I’d be willing to bet we’ve partied in the same fraternity houses.

I know this because she is the founder of Amandatory fun time, which clearly shows she likes to have fun. (I actually have no idea what that means, but think having fun makes sense.)

While you won’t see Amanda in the comments here every day (note to self: Talk to Andy about giving her more time), when she does show up, you’re bound to see a fun exchange.

She’s smart, she’s professional, and she’s extremely witty. When she’s about to make fun of you, she gets this look in her eye and she grins and then WHAM! But you like her so much, you just take it in stride.

While you can’t see her grin in the comments here, her wit is still extremely quick…and you’ll – at the very least – smirk when you see her appear.

I highly recommend you check her out. Introduce yourself, get to know her, and if you’re ever in Chicago, add her to your “must meet” list.

You can see her featured in a Chuck Kent original and find her on Twitter, LinkedIn, Google+, Facebook, and the Orbit blog.