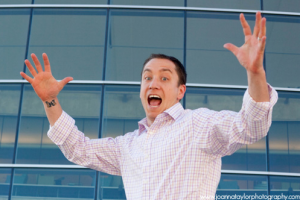 Last year, I was in Knoxville for Social Slam. I was at the opening night reception and I hear, “GINI DIETRICH?”

I turn around and there is DJ Waldow, the man I’d heard a ton about, but had never met nor really interacted with online.

He became kind of a big deal while he ran community at Blue Sky Factory, but when he left and began to travel west with his OB/GYN wife and their two kids (although I think it was only one at the time), he became an even bigger deal as the owner of Waldow Social and co-author (with Jason Falls) of “The Rebel’s Guide to Email Marketing” (we’re having him on for a Livefyre Q&A in September).

But since that fateful evening we met, he’s become a friend.

We have a lot in common to begin with: At the time he was living in Salt Lake City (where I grew up) and we have the same circle of friends.

Since then, he has moved to California (his wife got a big job at Stanford; clearly we know who wears the pants in that relationship), but continues his quest for better email marketing no matter his locale.

He’s a Michigan grad and is as big a fan of his alma mater sports as Mr. D is about his Kansas Jayhawks. He’s such a big fan, in fact, he recently made a trip east to see Michigan play Indiana and hang out with Jay Baer. I mean, hanging out with Jay would be enough for me, but apparently the game was a big deal, too.

One little known fact about DJ: He used to teach eighth grade American history. Which clearly means you can ask him anything you want about American history and he will know the answer (I intend to test this theory very soon).

Most importantly, though, DJ’s birthday is tomorrow. So connect with him on Twitter, LinkedIn, YouTube, Google+, subscribe to and read his blog, listen to his podcast with Nick Westergaard, buy his book, introduce yourself in the comments here, and wish him a happy birthday.