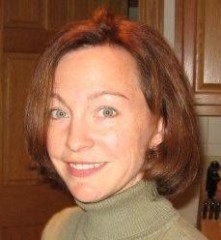 After 223 comments and 105 likes given, I figured it was time to highlight one Ms. Jen Zingsheim here.

How do I know this?

The first indication is the number of likes she’s given, but the second is the things she’ll say in other social media forums that make you think, “Huh. She’s been reading!”

The one thing I like about how she participates is she reads the comments pretty thoroughly (I’m 99.99 percent certain she read all 224 comments on yesterday’s blog post) and she contributes to those conversations in a very thoughtful and intelligent way. You know, if Jen comments on something you said, you’re going to learn something and be compelled to continue the conversation.

I’m pretty sure she and I began our friendship because we both worked at FleishmanHillard in our careers. Though she’s on the east coast and I’m in the Midwest, it’s highly likely we were at the same global meetings, particularly the one in Dallas in 2000.

In her business life, she is in charge of products and services at eOutreach, which is a CustomScoop product. She is a PR professional who hangs out with her peers so she can find new ways to help us do our jobs more efficiently.

Case in point: Her baby is having created a high-end media analysis to track messages and trends in the blogosphere and in social media. Of course, this differs a bit from their competitors who track any social media mentions. She realizes bloggers are important too (at least in our own minds)!

She says she’s a contributor to the company blog, Media Bullseye, but with the exception of a couple of posts from one other person, it looks to me like she runs the darn thing single-handedly!

She’s been featured on #MeasurePR, the Twitter chat Shonali Burke hosts and has been a big supported of Jennifer Windrum’s SMAC lung cancer with sock monkeys campaign. And, a little known fact, she’s lived in Thailand.

Spend some time getting to know Jen. You can find her on Twitter, LinkedIn, Media Bullseye, Google+, and in the comments here. You can ask her about her time in Thailand, about work, or about her married name (which I didn’t highlight here).

P.S. We have Jay Baer joining us on August 29 for a free webinar about his new book, Youtility. You can register here.