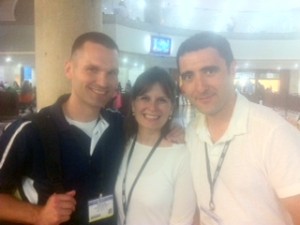 It’s been quite the week at BlogWorld where we got to meet many of our Spin Sucks community.

One of those people is John Falchetto, who brought his family to New York City on holiday so that he could attend the conference and meet all of us face-to-face.

John is the mastermind behind Expat Life Coach and actually owns the expat space on Google.

His past three businesses were started in Egypt, Canada, and the UAE. In 2008, as the crisis was beginning to hurt businesses around the world, John moved his family to the South of France, where most of his business is done online.

Think about that for a second. He lives in the South of France and operates his business online.

Talk about living the dream!

But he was telling me that, unlike the U.S., if his phone line goes down, the city will fix the part on public property, but any line going up and into his house has to be dug and fixed by him. So he’s been digging a trench so he can continue doing business online.

I love chatting with him because I think we all romanticize what it would be like to live abroad. But there are luxuries we have that other countries do not; we take them for granted. He’s pretty honest about what to expect, not only if you’re living abroad, but as an entrepreneur.

He’s an athlete, which is one of the reasons we began talking at first. He runs, he mountain bikes, he scales mountains. And, this weekend, he’s doing a 24 hour adventure race.

I asked him how on earth he was going to do that, having flown home just today. He’ll be jet lagged and he’ll be up for 24 hours starting tomorrow. That makes my brain hurt.

I’m always scared to meet people in real life who I adore online because, sometimes, people don’t represent themselves the same online and off.

But John is exactly what you would expect. I adore him even more now…and you will too!

Even if you’re not an expat, you’ll enjoy his blog. He’s one of my must-read every day. Trust me on this. YWRI.

P.S. That’s Marcus Sheridan in the photo with us.