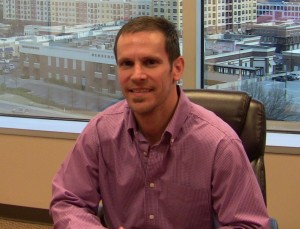 When I sat down to write this blog post, I did a search to make sure we haven’t already featured John Trader.

We haven’t, but he’s probably not a stranger to many of you because he’s been mentioned in or written one of 10 blog posts in the past couple of years and he also hangs out in the comments, where he brings a very fresh perspective to the topic du jour.

I’m always impressed with his knowledge when it comes to international marketing and communications and the things he’s learned about working with different cultures and in varying time zones.

He is the PR and marketing manager for M2SYS, which makes biometric products (think fingerprint scanners and other kinds of Minority Report technology). One glance at their home page and you can tell he’s good at his job.

Not only do they have the social media icons on the home page, they are actually tended to and cared for on a daily basis. This may seem like an odd statement, but I’d venture to guess nine out of 10 websites that I review (before speaking engagements or new business meetings) have the icons, but no one has touched them since 2010.

This is a huge testament to John and his team, who also blog once a week. The most recent post is about using biometrics to ID “mystery” patients, which is compelling because I watch a lot of Law & Order and they always have some victim who they can’t ID. But, even in the real world, you can see the application, right?

Plus it sounds like a very cool industry in which to work. From what I gather, his brother runs the organization so he gets to deal with those challenges, as well. I have a couple of friends whose kids are in the business and it presents a layer of interesting issues you can’t imagine without the experience. But John seems to handle it all in stride, pushing forward where he knows things are going and making sure they’re available to their customers wherever it’s convenient for them on the web.

He lives in Atlanta and, in his spare time, he coaches lacrosse. Scratch that. He used to coach lacrosse. Now he’s a referee. Is that a promotion?

What an all-around good guy! So check him out, introduce yourself, and get to know him. He can be found on Twitter, Google+, and LinkedIn. You can also read some of his former musings on PR and marketing at PRBreakfast Club.