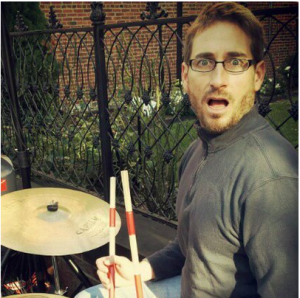 When Marketing in the Round came out last spring, it was a lot of fun for me because I got to meet some of Geoff Livingston’s peeps, especially the ones who live in his hometown.

Jon-Mikel Bailey is one who quickly became a friend of mine, mostly because he has that sense of humor that is completely insane. Everything he says, writes, and does makes me laugh. Everything (no pressure in the comments here today, JMB!).

For instance, he sent me an email the other day with the subject line: Three Things (Ha! See what I did there??).

Alluding, of course, to The Three Things we do here every Sunday. It made me laugh!

Professionally, he is one of four partners in web and mobile design and development firm, Wood Street, also the name of their blog.

They started the business because websites (at the time) were being created just to have one (kind of like today’s “we need a Facebook page because everyone else has one”). They saw a need to change that thinking to encourage strategic marketing and communications and evolved that into the creation of sites that allow two-way conversation.

They will celebrate 11 years in business this August, which means they’ve not only survived the eccentric web environment since 2002, but an economic disaster (no small feat in itself!).  And they’re very proud of the fact they’ve been profitable since day one.

He’s married and has a little girl – who is gunning after her dad’s leadership position at work (and probably will be better at it) – and two dogs.

He plays the drums, he cooks (I challenge him to a duel!), and he’s hilarious (did I mention that?).

You can find him everywhere on the web, depending on your communication preference. He’s on Facebook, Google+, LinkedIn, Twitter, the Wood Street blog, and you can learn more about him in this cool interview.