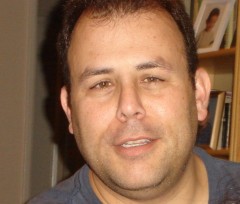 A couple of years ago, I was having drinks with Adam Toporek and Bill Dorman in a hotel lobby in Orlando and the subject of one Mr. Josh Wilner came up.

Although he’s a prolific blogger, he’s a bit of a secretive man and we convinced ourselves he is a huge syndicated writer. In fact, *I* think he might actually be Dear Abby. Yeah, yeah. I know. It’s “supposedly” written by Jeanne Phillips, the daughter of the original author, but I’m convinced Josh is Jeanne.

In all seriousness (though I do hold a slight hope I’m right), Josh is a blogger, a dad, and (we finally learned) a senior copywriter at OCGPR. As a side note, Google OCGPR instead of clicking on the link I so handily provided for you. It makes me laugh that Oswego County Guinea Pig Rescue is the first thing to pop up, but that’s not where he works (unfortunately). It is a PR firm based in Dallas.

Which is kind of sad because his family is in Los Angeles so he commutes back and forth. Not every week, mind you, but quite often. And, if you know Josh, you know what a sacrifice he is making to earn a living because he loves his kids to death.

I’m not one to share photos of someone’s kids without their permission (and Josh won’t know about this until I hit publish), but you should see his kids. His daughter has this row of freckles across the bridge of her nose that make you want to take her in your arms and give her a big squeeze. She’s going to give the boys some trouble in a few years! Sorry, Josh. It’s true. I hope you’re preparing now for the onslaught of boys in your house.

Josh has been a member of the Spin Sucks community for a very long time. Mostly he has really interesting and thoughtful things to say, but he has been known to throw in some squirrel jokes (I hate them; a story for another day) or call me an unfortunate nickname or act like he’s my brother.

If you hang out in the comments, even just to lurk, there is a 99.9 percent chance you already know who he is. For those of you who don’t, getting to know him won’t be a waste of your time.

You can find him on his blog, on Facebook, on LinkedIn, on Twitter, on Google+, on Pinterest (!!!), and maybe – just maybe – he’ll admit he is, in fact, Dear Abby and you can read him there.