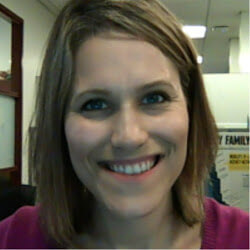 About a year ago (maybe longer?) I received a tweet from one Ms. Kat Krieger (Katherine, if you’re speaking to her professionally) asking me if I’d be willing to appear on the Brand Connections podcast, Brand Fast-Trackers.

Hosted by Brian Martin, the founder and chairman of Brand Connections, Kat’s job is to invite guests who are doing cool things in the marketing, advertising, and PR worlds.

Brian and I had so much fun during our first recording last October that Kat invited me back in May when Marketing in the Round came out.

From there, Kat and I began a totally awesome friendship. For my birthday this past year (February 10th for those of you so inclined to write it down now so you don’t forget), she sent me the most delicious chocolates I have ever tasted. In that little box of chocolates from NuNu Chocolates were these salted caramel chocolate delights that were so good, I was happy there were only two so I didn’t eat the entire box in one sitting.

Though we still haven’t met in person, we became Facebook friends, where I harass her husband about letting her reorganize closets (and even volunteer to help), get to know her two adorable little girls through photos and hilarious stories, and learn about her parenting joys and challenges.

She also is trying her hand at feeding her family non-processed, non-sugared, non-dairy, non-genetically modified foods, which in and of itself is extremely admirable. I’m trying the non-processed thing and it’s not as easy as you think. But it made me laugh out loud when her husband told her all of that was great, but they still needed sour cream in the fridge because it makes everything better.

For those of you who are Gin and Topics fans, she is the source of many a video featured there.

She pretty much, all around, rocks and you need to get to know her.

Stop by the comments and say hello today. You also can find her on Twitter, Google+, Pinterest (!!!), LinkedIn, and the Brand Fast-Trackers blog.