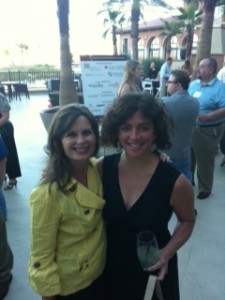 This is not my typical #FollowFriday. Typically, as many of you know, I recommend only bloggers and authors, with the intent of introducing you to new voices and helping them increase their networks.

But today, though most of you likely already know her, I want to delve further into our chief content officer, Lisa Gerber (aka the face behind Spin Sucks on Twitter).

Lisa and I met at Counselor’s Academy in Palm Springs two years ago. In fact, we met two years ago today (I know this because we’re at the same conference in Vegas right now). We instantly became friends/bosom buddies/soulmates and wondered aloud, many times, how we could create a way to work together.

But Lisa lives in Idaho and I live in Chicago and, while technology makes the divide not so great, I knew how important it is to have a start-up team in one spot while we launch, and get through the first year of, Spin Sucks Pro.

And she works with local companies who don’t care to have a presence in Chicago or New York, so it didn’t make sense for her to form a partnership with us.

And then, last summer, I heard Tony Hsieh speak. He talked about how he and his executive team went to college together and how they’ve been friends for a very long time. He talked about how important it is to have people you trust around you as you launch and build a business. He talked about the misnomer of working with your friends, as long as you know you can trust them to do their jobs and have the business’s best interests at heart.

It went against everything I’d heard before about business growth, but I’d hired strangers (some who, later, became friends) throughout the growth of Arment Dietrich and, because I was giving up some equity in Spin Sucks Pro, I thought, “Why not?”

I was lamenting to Lisa that I wish she lived closer or that we could find a way to work together. I said I really needed someone on the executive team who could be in Chicago for a year after we launched.

And she did. In January. She left her husband and her dogs and her skis and her mountain bike in Sandpoint, Idaho, and she moved to Chicago in the worst month of the year. She left stability and control in exchange for working in the gray and the hopes of being part of something that will change the perception of the PR and marketing industries for good.

She is a calming force in our office. She understands the need for balance and, in her quiet way, she’s a huge influence on me. She helps us all understand the need to rest, relax, and recharge (which you all know is VERY hard for me). She is a balance to my ultra-competitive, super-charged drive because, while she’s as driven as me, she has a more encouraging way about her.

What started out as friends has become a peer, a trusted advisor, and partner in the truest sense of the word.

If this doesn’t convince you to love her immediately, then find her on Twitter (both as Lisa and Spin Sucks), see her blogging here every other Wednesday, or find her in the comments. Oh! And wish her a happy birthday!