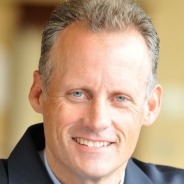 Yesterday I had the sheer pleasure of meeting Michael Bowers at the Ohio Growth Summit, a conference he puts on every year for business owners.

I’ve followed him on Twitter for many years so I knew what to expect. But you know when you meet someone and you like them as much, if not more, than you do online?

That’s Mike. Before I actually met him, though, I heard over and over again how well-respected he is in Ohio and, particularly, in Columbus.

As you know, I do a lot of speaking. And I go to a lot of conferences. But I’ve never been to a conference where I was treated better.

To start my trip there, Mike kept tweeting things like, “Tracking @ginidietrich is like watching the Santa Tracker” and “Everyone welcome @ginidietrich to Columbus.”

The community rallied on Twitter and sent me welcome tweets all night.

When I arrived at the conference, parking was a nightmare. Mike took my keys and found me a parking spot so I could head into the conference and attend some of the breakout sessions. Not only was I astounded, I was grateful there still are gentlemen in this world (and I’m totally OK with that).

Then he tweeted, “[email protected] is in the building!” He made me feel really special, which explains part of the reason he’s so well-respected.

When he got up on stage to introduce me for the closing keynote, he relayed a story of Denai Downs Vaughn, who he met at a conference Carrie Wilkerson put on in Dallas last year. He said he was working with Denai to figure out how to get her to Ohio to participate in the conference in 2012.

Last November, Denai was killed in a car accident. Mike stayed up all night, after hearing the news, mourning and writing.

Yesterday he honored Denai as a keynote speaker and the room stood and applauded.

Mike is a force to be reckoned with and “well-respected” is putting it mildly. He joked he would never again do this conference, but I can guarantee it will go on next year, like it has the past eight years.

If you’re a business owner or thinking about starting a business, I cannot recommend you attend more. In fact, I tweeted:

You can find Mike on Twitter, Ideas to Deals (his blog), and hanging out on the Ohio Growth Summit blog.