I have proof the weather in Chicago stinks!

Not only has it rained every, single day for at least six years now (not a slight exaggeration!), Susan Silver has provided proof that it’s ridiculously terrible. 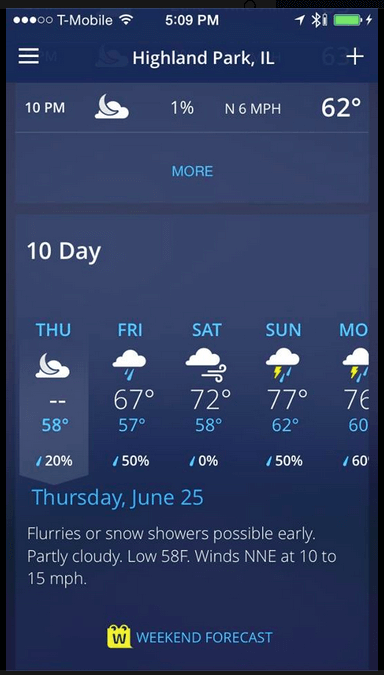 I know it’s a mistake (and kind of a funny one at that), but that’s how it’s felt all summer.

Do you know how many times I’ve been outside on my bike this season? Maybe once a week. Maybe.

Normally by this time of year, I have a serious cycling tan going on. I can’t normally wear a dress with spaghetti straps or sleeveless for the Fourth of July because of my tan.

Not a problem this year!

Look, I love snow. I’m a big advocate of The Snow.

But not in June.

Let’s get it together, Mother Nature!

Now that I’ve had my weekly rant about the weather, I’ll give you Gin and Topics.

Thank you for listening.

This week’s videos are courtesy of David Griffith, Mindy Mikami, and yours truly.

5. Fight Club for Kids. Chuck Palahniuk, the author of Fight Club, has written “Fight Club 4 Kids” to reach a new demographic because, well, his average reader is having kids…or dying.

4. Artist Seb Lester Freehands Famous Logos. I’m my head, I am this talented. I can totally draw logos like this. The reality is I can spell the company names. And that’s it. This is very cool!

3. Ed Sheeran Sings Limp Bizkit, Ty Dolla $ign. I found this a couple of weeks ago, but have saved it so we didn’t have a full Gin and Topics of Jimmy Fallon. In this video, “baby faced” Ed Sheeran sings the most disturbing, soul crushing songs. Not super safe for work because of naughty language in the song lyrics.

2. Celebrities Read Mean Tweets. It’s back with a new episode! I really love these. If I were to collect the mean things people say about me, “What kind of fashion sense do you have? Dark nail polish should only be worn in winter” would make the top of the list. Warning on this video: It’s 21 minutes long because ALL of the celebrities read mean tweets (might be a slight exaggeration, but there are a lot).

1. Chris Pratt Runs in Heels. My friend Carlos Cruz was over the other night and he said I will hate Jurassic World. I asked why and he said because the heroine runs in heels the entire movie. He’s right. This drives me crazy. It’s just not practical. It looks sexy, but there is no way you can run from dinosaurs in six inch heels for two hours. Because “If I had known we were going to walk, I wouldn’t have worn heels.” Exactly. And that’s why this clip is hilarious!