It has been a crazy, but totally fun, week! Thank you to all of you who participated in the Marketing in the Round launch!

Thanks to all of the photos everyone posted and the Facebook Timeline, Geoff Livingston and I have an incredible story we’ll be able to look back on for many years.

I’ve had lots of people ask me how sales are doing. We don’t know yet! Amazon refreshes on Fridays and, as of this writing, it hadn’t been updated.

In other news, Facebook went public this morning at $38 per share, which raised $16 billion for the company and made Mark Zuckerburg the 29th richest person on earth.

It’ll be interesting to see how they do throughout the day. I’ll definitely be watching!

In the meantime, I give you Gin and Topics.

5. Where the Wild Things Are. Yes, the book we all grew up with, but as read by Christopher Walken. He doesn’t just read the words, but also describes the pictures. Not for kids to see. It’s really, really great! Howie Goldfarb, did you send this to me? It’s great!

4. Teachers Pull Spectacular Prank. While high school students are being interviewed on video, their teachers video bomb by dancing in the background. It truly is spectacular. And the guy at about :50 has some serious moves. Thanks to Christina Pappas for tweeting it to me!

3. How Pixar Almost Deleted Toy Story. I had nightmares after watching this. Not because it’s a bad video, but it’s super stressful to imagine your entire business going down because of one minor mistake. Michael Schechter and I had a fun email conversation about it. Phew! Stressful.

2. Insults from Luther’s Works. Taken from the 55 volume set of Luther’s Works, Tyler Rasmussen created a little site that provides you some nice insults, if you’re feeling particularly good about yourself. I wish I had both the time and creativity to do something like this! Thanks to Kat Krieger for sending it to me! 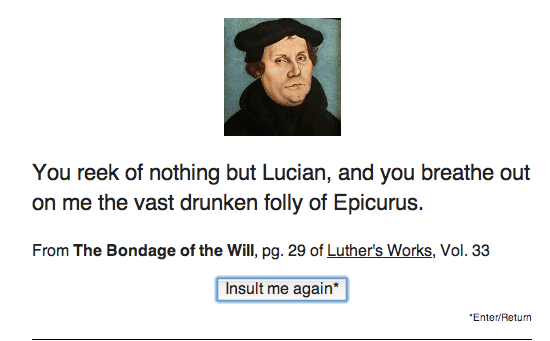 1. Governor Christie Channels Seinfeld. This is awesome! New Jersey Governor Christie totally makes fun of Mayor Booker’s hands-on approach. The best part? They do the video together. Thanks to Ken Mueller for sharing it!