Granted, it’s just a dusting, but now I can say December 9 is when we FINALLY got snow in Chicago.

I think this is the latest we’ve ever had snow. I hope Mother Nature makes up for it in the coming weeks.

While I’m thinking about snow, which makes me think about Christmas, you only have 15 shopping days left.

Are you almost finished? I have only an eighth of my shopping done. And I have to get things shipped. Crap.

On that depressing note, I give you Gin and Topics.

5. Siri Parody. Ces Guerra sent this to me last week and holy cow is it funny! It’s a fight between a husband and a wife, using Siri as the messenger. My favorite? “Send my wife directions to hell.” HAHHAHAH!

4. Social Media Updates. Twitter launched branded pages, Facebook bought Gowalla (and then shuttered them), and tools such as Path are creating some noise as a Facebook app replacement on your phone. Lots happening this week!

3. In National News. Our former Governor, Rod Blagojevich, was sentenced to 14 years in prison. He has to serve 12 of those years, but he doesn’t have to start until after the holidays. He goes to the Big House in February. Lucky him. In some sort of play to maintain relevance (for her and the magazine), Lindsay Lohan is posing on the cover of Playboy. The thing that creeps me out about that? Her dad brokered the deal. I love my dad, but I do not want him to see any part of me naked. Kirsten Dunst is interviewed in the January issue of Lucky and she says something I’ve always wondered about. She said it’s weird to move to a new neighborhood and meet the new neighbors because you know they’re thinking, “I saw your boobs in your last movie.” That’s what I always think when women bare it all. Your grandparents, your dad, your future children, your neighbors, and your friends ALL SEE THIS. I don’t get it.

2. Would You Fire Someone for Refusing to Wear a 666 Sticker? A man in Georgia claims he was fired when he refused to wear a 666 sticker, signifying how many days the plant he works for has been accident free. You can’t blame the guy – there are lots of people who are superstitious. But firing him over it? Seriously? It’s a sticker. It’s going to change tomorrow when you’re 667 days accident free. 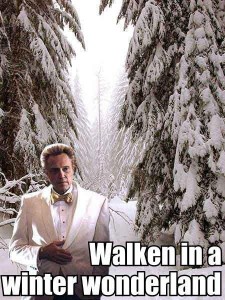