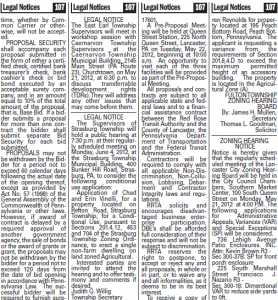 Quick, go get your daily newspaper (you subscribe, right?).

Now flip to the back section…the classifieds, and look for the part labeled something along the lines of “legal notices.” I’ll wait.

Ok, now you should see a lot of legal mumbo jumbo in small print about your local city or township having a public meeting to discuss budgetary matters and what-not.

You check that section of the paper every day, right?

Well, believe it or not, government bodies are required by law to pay for those notices.  Here in Pennsylvania, the state code says “public notice must be given for all public meetings” and in most states there are guidelines that dictate such notice should be done via “a newspaper of general circulation.”

The idea is, by publishing the notice in the newspaper, the legislative body in question can’t get away with making decisions behind closed doors. But really, when’s the last time you ever thought to look in the legal notices in a newspaper to stay informed? And what, exactly, is a newspaper of “general circulation” anymore?

One of my clients is a very small township of just more than 5,000 residents. Money is tight for everyone, especially government bodies, and this particular township is required by law to spend about $14,000 a year on advertising. Not a lot of money in the grand scheme of things, but translate that to a major city like Philadelphia or Chicago, and just imagine how much they are required to spend.  As well, the large majority of newspapers are seeing declines in subscriptions.

Let’s do the math:

And yet they are still required to spend the money on newspapers to notify the public.

One of the rules of marketing is,

“Fish where the fish are.”

If the goal is to notify the general public of meetings, perhaps it’s time for legislative bodies to get on board with this whole online, digital thing.

Total newspaper circulation in the U.S. is estimated at about 48 million (and declining) while Facebook use in the U.S. now stands at more than 157 million (and growing). More than 239 million Americans have Internet access.

A recent Council of Economic Advisors analysis of LinkedIn trends shows that, while the Internet and online publishing are among the fastest growing industries in the U.S., newspapers are the fastest shrinking industry in the country. 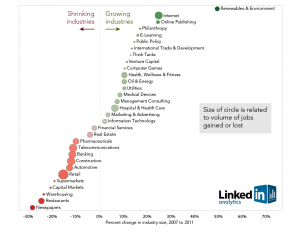 Wouldn’t it make more sense for states to allow local governments to use their online properties such as websites and Facebook, to reach more people while cutting back on spending?

Yes, I know I’m asking for common sense to reign in a realm where common sense is in short supply. And I also know the newspaper industry would fight such a change for fear of losing a large chunk of easy revenue. But now is the time for change. Citizens have greater access to online properties, and the Internet and social media offer greater avenues for participation within the government process. Sadly, governments, like newspapers, are slow to change.

Seems to me if you really want to hide something from the public, the legal notices of the newspaper might just be the place to be.

What are your thoughts? Is it time we unshackle our government bodies from the heavy yoke of mandated print advertising? Do you agree that putting these types of legal notifications online would actually enhance participation in local government?

Ken Mueller combines his 30 years of experience in the media industry at Inkling Media. Follow him on Twitter @kmueller62.