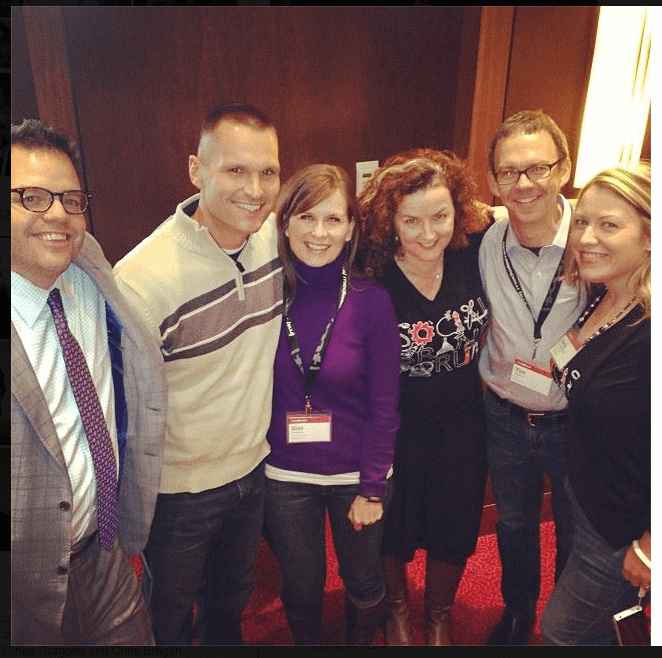 I met Kerry Gorgone exactly one year ago at Social Brand Forum in cornfield-laden Coralville, Iowa.

Up until that point, I had a very healthy respect for her brain, but after meeting her, I also love her personality.

She is a former attorney and I love her take on the rules and regulations (and sometimes lack thereof) around social media.

In fact, one of the guest posts she wrote for Spin Sucks was about whether a supervisor should be friends with his or her colleagues on the social networks.

It’s an interesting conundrum, particularly in the communications world where personal and business really don’t have a dividing line.

She hosts the weekly Marketing Smarts podcast for MarketingProfs and was one of the best interviews I’ve ever had.

She does her research and she knows what she’s talking about.

For those of you who don’t already know the force that is Kerry Gorgone, I’ve invited her to sit on the Spin Sucks Inquisition seat.

This is a tough question for me to answer, because each of my many course corrections has brought me to where I am now.

I invested a huge amount of time and money in law school, but even though I don’t practice law now, I wouldn’t call that a mistake.

My JD has brought me so many opportunities, even outside the practice of law.

I taught university classes in law and marketing before joining MarketingProfs, which probably wouldn’t have happened without my law degree.

My legal background has also helped me to land speaking gigs, because people are very interested in the intersection of law and social media.

After seeing how my career has evolved, I wouldn’t say that there are any mistakes: Just lessons to be learned, and I’ve learned them.

I do have one regret, and that’s not figuring out much sooner that letting someone else call the shots for me makes me miserable.

I had to cancel vacation plans once because a senior partner tossed a court filing on my desk before he left for the weekend, and our client’s response had to be ready for Monday.

The filing had been on the partner’s desk for several weeks prior, by-the-way.

After spending the weekend working nonstop, I didn’t feel accomplished and proud: I felt resentful.

Now I work with people who respect my contribution and my time, and I’ve managed to achieve a much better blend of career pursuits and life in general.

I am a huge geek. I don’t know if many people believe me when I say that, but I am.

I’ve watched all of his stuff, from Buffy and Angel, to Firefly and Dr. Horrible!

I am also conversant in Doctor Who, Star Trek TNG, and Lord of the Rings.

Not Star Trek Voyager, though. Ain’t nobody got time for that.

It’s tempting, particularly because those years would come off the butt end of my life.

Still, none of us knows when our time is up.

I could make that bargain today, and maybe it turns out that I was going to die 10 years from now and I just burned my last decade!

So, no. I think I’ll let time pass the way it normally passes: “really slowly, in the right order.” (Doctor Who.)

I’m all for authenticity, but I think the call for “transparency” is a little overstated.

I get that everyone’s lives look better on Facebook, but do you really need to know that I did three loads of laundry today, or that I haven’t vacuumed in a month?

I’m not trying to whitewash my day-to-day life, but why would anyone need to know that I had to replace the fuel pump in my car, or that someone in Riyadh tried to use my debit card after I bought coffee at a mall kiosk?

I don’t know. I just don’t think that the minutia of my life is that interesting to people, so the whole “let’s all be real on social media” starts to bug me, because I’m not trying to be someone I’m not.

I’m just posting things I think are interesting and relevant, rather than occurrences that are universal (and generally boring).

A. I read so many books in preparation for interviewing guests on the Marketing Smarts podcast, so it’s hard to pick one, but Ann Handley’s Everybody Writes is fantastic!

She’s so unassuming and funny, and the advice she gives could make anyone a better writer.

Of course, I work at MarketingProfs, so she might prank me or something if I didn’t choose her book. But I’d have chosen it anyway. It really was the best.

Because whatever you gain in the (very) short-term, you lose by being found out almost immediately thereafter.

There are no secrets these days, so any “spin” only serves to brand you as a liar.

In our business, that’s a tough bell to un-ring!

Where You Can Find Kerry Gorgone

As a true social media expert might be, you can find Kerry pretty much everywhere online.

Photo is, from left to right: Jay Baer, Marcus Sheridan, me, Laura Fitton, Tim Washer, and Kerry. Lee Odden was the photographer.