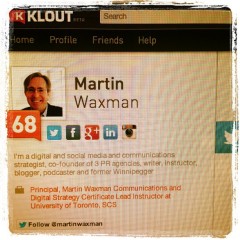 A few weeks ago, I wrote a two-part series here on the future of PR, and what a model for New PR might look like.

And I got a lot of great feedback and comments from readers. Thanks so much!

I also got another surprise. My Klout score increased by three points.

But, I also have to admit when I noticed the upward trend, I felt like a kid who’d put in some extra effort studying for a test, and passed – as in, all that work can pay off.

I had a Klout Bump.

By my definition, a Klout Bump is a noticeable yet meaningless increase or decrease in a Klout score that happens quickly, but only lasts for a short period of time.

From a purely egotistic perspective – and if you pay attention to those things – it can make you feel artificially better (or artificially worse). Personally, I don’t believe that quick jump up or down says anything about your long-term influence. It’s a minor popularity blip.

Klout Bumps remind me of that kid in high school who hangs out with you – or not –  based solely on what s/he thinks the cooler kids’ perceptions are. It’s the equivalent of having insider info. You share it, it creates a furor, and suddenly you’re in the center of things. You’re one of the cool kids. But it quickly passes and you go back to your regular, non-influential self.

In that respect, social Klout is a fair-weather measure of influence.

Not the First Time

This isn’t the first time I’ve had a Klout Bump. It happened on my last birthday.

You see, that’s when the algorithm picked up on the good wishes I received (thank you!), and spurred a short-term upward influence swing. Gini Dietrich and I talked about it at the time, and she said I should tell people my birthday is every month to see how much my score would increase.

The reverse has happened, too. One year when I was on holiday, I was quieter than normal on social channels. I got back to find my Klout score had plummeted. (OK it fell by two points, but you get the idea.)

Did my influence – or non-influence – truly change during such a short period of time? I don’t think so.

So What is Influence?

That is the question. For communicators and marketers, it’s something we’re trying to identify, understand, and quantify.

But true influence is complex, and not simply the difference between being ‘liked’ and ‘well-liked’ (reference: Arthur Miller’s Death of a Salesman).

Influence in business is the measure of how well one person can persuade another to perform a requested action for a brand. With social media that’s become more important than ever.

Clearly we need to figure out how to measure influence, and some people are doing a good job pointing us in the right direction.

Danny Brown and Sam Fiorella wrote a book on the subject, Influence Marketing: How to Create, Manage, and Measure Brand Influencers in Social Media Marketing, with insights on what makes influence matter.

And while there are many factors, they believe much depends on the situation you’re trying to influence. The context, as well as whether or not you have any real clout. And that makes a lot of sense.

My sphere of influence differs from yours. Grasping that fact when trying to find people influential in the areas important to your brand is key. Otherwise it’s just a game of high scores, with no particular skill – or influence – attached.

In the meantime though, let’s have a bit of fun with this. Pretend I’m running for class president, and tweet/share this post all over the place!

Let’s see if I can get above a 70 Klout Score. There will be prizes if I do.