For as long as there have been public relations practitioners, the industry and those in it have had a complex relationship with the ethics surrounding our work.

Like any industry, there’s a mix: Some PR people aren’t all that ethical. Others strive to do the right thing in every situation.

But the proliferation of new tools, channels and tactics can sometimes lead people into new situations that don’t have pat, black-and-white answers.

So what are the biggest ethical challenges on the PR landscape today? We asked — and, man oh man, did you have opinions!

Influencers. Pay for play and the lack of acknowledgment by many brands and those promoting them for a fee.

Deidre Lopian was quick to concur, adding that a new class of publicist has grown up alongside these new influencers:

PR pros have the skills to make it happen for both macro and micro influencers. However, “Google” publicists are on the rise, taking advantage of micro-influencers who have a lower budget. Aside from misrepresenting themselves as PR pros, their lack of knowledge and shortcuts are eventually going to ruin their clients’ image and status.

The Misuse of Data

Scott Moody pointed out that sometimes, ethical challenges can be personal, particularly as more and more of the media has moved to analysis and opinion and away from straight reporting:

Little bit of a different take on this, but a big challenge I face is working with media outlets that I have my own personal ethical conflicts with but may have high value for my clients. Seems harder than ever to keep personal bias out of the picture.

Katie Robbert says it’s not just people, but people and how they treat data:

Not the biggest challenge, but one I’ve seen is misrepresenting data, spinning it if you will, to make your point more impactful. We ran into that a lot when we would run consumer surveys for PR teams, they just wanted to pick and choose and twist the data to tell their story, not the other way around.

All of this produced a lively discussion in the Spin Sucks Community (Pro tip: You really, really should join!) and even changed some minds. Like Shane Carpenter’s:

I don’t think there is one big thing. I believe there are many places that we could go wrong and that could snowball into a perfect storm of ethical violations. That said, I was ready to come in here and say that we are able to gather more data than ever about people and our challenge is how to treat and use that data. After seeing this discussion, I’m going to change that. There is a theme that I see in this conversion. Our biggest ethical challenge is transparency. Whether we are gathering data, working with influencers, or the media we need to be transparent. If we are not we risk being nothing more than manipulators and spin doctors.

Nance Larsen, immediate past chair of the Public Relations Society of America’s Board of Ethics and Professional Standards, echoed Carpenter’s thoughts:

The Search for Truth

Annie Perkins, SVP at SHIFT Communications, made the distinction between transparency and truth:

The biggest ethical challenge we face in PR today is the search for truth. There is so much data that can be positioned and repositioned, cut and pasted, to create a narrative that tells a story. But, we must seek the truth and tell honest stories. We can’t allow ourselves to lower our standards to get headlines or spin a negative into a false positive. As John Lennon says, “Being honest may not get you a lot of friends, but it’ll always get you the right ones.” I believe the same holds true for brands. Authenticity and transparency are no longer lofty goals but instead table stakes of the game.

Jason Lavis pointed out that, with algorithms feeding us what we want to see day in and day out, polarization has increased, making everyone’s job more difficult:

In the past 2-3 years there has been a seismic shift in public opinion relating to political bias, and truth itself. As more of the global population gets their news from social media, they get fed information via algorithms that give them more of what they ‘like’. This has lead to an increase in the polarisation of opinion, and high levels of moral panic and outrage for opinions that contradict. For public relations, a client might be tempted to push an opinion that could be inflammatory to certain groups. Likewise, we have our own personal biases that cloud our opinion of what is ethical and acceptable. We constantly walk a tightrope of truth, with a potentially angry mob that might appear below us at any time. We all experience this as individuals while on personal social media accounts; for a PR representative its a new skill set to navigate.

Ethics is an Afterthought

And agency consultant Chip Griffin said that ethics need to be baked in and not a bolt-on:

The biggest challenge is that ethics is an afterthought for many in the PR community. It’s not that they are consciously unethical, but too few are actively considering ethics at every level: in promises to prospects/clients, in dealing with the media, in managing influencer relations, in judging client requests/behavior, and more. Those who raise ethical concerns internally are too often scoffed at, ethics training is usually viewed as a notch above punishment, and very few project templates include an ethical review.

And lest we think we’ve seen it all, Chris Frantz calls out for-fee pseudo journalists:

Just received yet another one of these “journo requests that require a symbolic fee. Release just went out on the wire. They scrape the wire for new releases, grab the contact info, shoot off an email from a Gmail address. Ugh. 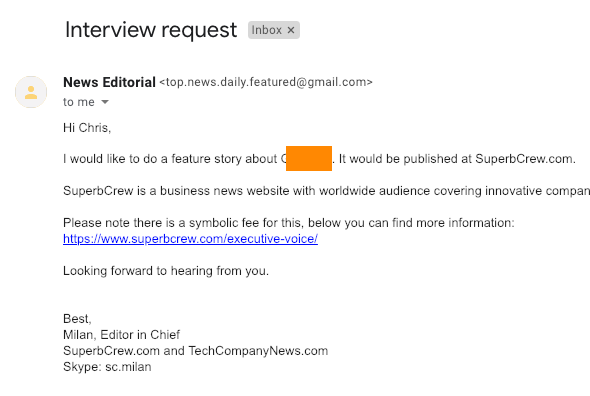 So what do you think the biggest PR ethics challenges are these days? And what will it take to overcome them? How much of a difference does it even make anymore?

You can answer here, in the free Spin Sucks Community, or on the socials (use #SpinSucksQuestion so we can find you).