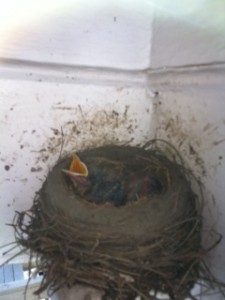 It’s Facebook question of the week time (clap, clap, clap!) and we have two questions that are pretty similar in nature. So, no pun intended (which you’ll understand when you watch the video), I’m going to kill two birds with one stone.

My IRL BFF, Carlos Cruz, asks, “What’s your opinion, should you have just one twitter account? Or one personal and another professional?”

And Hansjörg Leichsenring asks something similar, “Hi, I would like to ask a question regarding your twitter usage. You have two accounts, @ginidietrich and @SpinSucks. What is the reason for this?”

I answer both questions in this week’s video. And I have a little surprise for you, which is why I’m recording outside, even though Ken Mueller will think it’s because I want to upstage him. It’s not! I promise! You’ll see why I couldn’t wait until next week in a second.

So watch the video (if you can’t see it in your Reader, click here and it’ll magically appear), move to the comments and tell Carlos and Hansjörg how you would answer their questions, and then head over to Facebook and leave a question for me to answer in a coming week.

Except Danny Brown and Nancy Davis. You’re both banned.