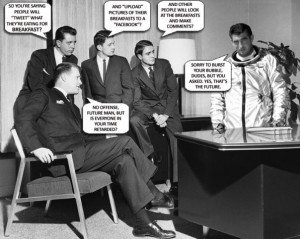 This post was already cooking in my brain last week and then Gini Dietrich wrote about  social media in Egypt. She got in my head a little bit but I have more to say, so pardon some of the redundancy (we could all use a little repetition, couldn’t we?).

I had a real estate developer client many years ago. They were very proud of the fact that they had Internet access in their homes and as far as they were concerned, I couldn’t make that fact prominent enough in all the messaging.

Really? (I thought).  Should we also mention that there are floors in the homes? And oh! How about telephone access? We need to include that. At what point do we realize social media isn’t so shiny anymore? When do we stop giving it credit for doing things like starting a civil rights revolution, or tumbling a company, because of an offensive tweet?

Every organization is online in some manner or another. It’s like having a telephone or a floor in your home. Only, some are better at it than others, just like some floors are a polished hardwood, and others are curling linoleum.

But I digress – I’m not here right now to talk about the execution of social media tools.

But it did not cause a human revolution.

In referencing the Twitter Revolution, Ulises Mejias blogs: Why don’t we call the Mexican Revolution (1910-1920)  the Leica Revolution for the social media tool (the camera) that was used to spread their message? And to that, I say, “exactly.”

I was hoping to be the first “intellectual” to reference Malcolm Gladwell’s New Yorker piece on social media and the Small Change it has on society, but Gini beat me to it. Mr Gladwell opens the piece telling us about a protest that took place in 1960. It started with four black students and grew each day. By the third day there were 30 people, by the 6th day there were 600. In a few weeks, the demonstration had grown to about 70,000 people. See? A civil rights movement occurred without social media. While I totally agree with him, he omits a big difference: with the use of social media, that protest would have blossomed to 70,000 in a few days rather than a few weeks.

The new technologies accelerate and amplify the message. Has the world changed? I’d argue no. Have the dynamics changed? Hell, yes.

I watch the debate about whether social media caused the change in Egypt and think to myself, well sure! social media is playing a huge role because it exists now! and its free! and they’d be stupid not to use it to their advantage! Duh.

While so much is changing, it all remains the same.

What does this mean to us as consumers, marketers and business owners? It’s time to stop thinking about social media as a cause and effect and more of a tool in the box (and I’m not talking about the sharpest tool in the toolkit) Don’t assume because you’re “on social media” that your business/reputation/fill-in-the-blank is going to explode, or because you send out an offensive tweet, that its all going to implode.

It’s media. All media is social and all the same rules apply since our parents raised us to say please, thank you, nice to meet you, and I’m sorry.

Thanks to Zenporf Advertising blog for the neat-o image