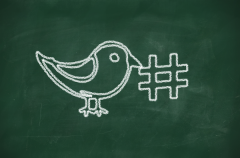 I hope everyone in the U.S. had a really good Thanksgiving!

If you follow me on Facebook, you already know that we made bracelets on the Rainbow Loom, took a cycling “class” in my basement, cooked and ate Thanksgiving dinner, saw Frozen, went ice skating, made our own pizzas, and visited The Bean at Millennium Park.

There are only 14 more business days for me in the year and, as I look to 2014, I’ve been thinking a lot about how social media has changed since I was BearsFan07 on Twitter six years ago.

The Evolution of Social Media

Though it is no longer as intimate as it once was and not nearly as much fun, there are a few things that haven’t changed all that much and some that have gotten worse (hello, narcissism anyone?).

Way back when, we were all testing and trying new things. We were curious and willing to take some risk.

Today, we’ve become much more comfortable with our use and, in some cases, a bit lackadaisical.

Following are six ways to evolve your social media use in the next year.

This is a “rule” I’ve been touting since the beginning and I still believe it today: Eighty percent of what you share should be about someone else and 20 percent can be about you.

This means you are aggregating content from bloggers, journalists, podcasters, and writers whose content you agree with. It supports your thinking, the way you do business, or where you believe your industry is going.

Following this rule prevents you from creating a social network that is all about you and from becoming narcissistic. It also motivates others to want to share your content because you are so giving through your social networks.

This also means you have to test, test, and test some more.

I tweet content 11 times every day. This does not include any conversations, direct messages, or things that come up throughout the day.

On Facebook, we try to update at least four times every day. On LinkedIn, once a day. And on Google+, twice a day.

We test the number of updates continuously and find this works for nearly every organization.

We have one client, though, whose Facebook posts do really well with only twice a day updates.

We discovered this when we did four a day for a week, then three, then two, and then one. Sure, it took a full month to figure it out, but now it works like a charm!

Part of your testing also includes figuring out the geographies of your audiences.

Some people get on their social networks at 5 a.m. ET and then you don’t see them again until after work hours.

If you’re on the west coast, that’s 2 a.m. your time, but your east coast audiences are consuming media.

I’m a big fan of scheduling posts for that very reason. I use SocialOomph to schedule my tweets so I can hit the people in different geographies.

Don’t automate your conversations, but you can do so with the content you’re sharing.

This is where people still get frustrated about the value of social media.

If you think about it as a conversion funnel, it becomes less frustrating and intimidating.

The top of the funnel is the first exposure to you – in this case, your profile.

What are you sharing that is informational and valuable not to you, but to your fans and followers?

The middle of the funnel is how you earn your fans and followers. Is it by following the 80/20 rule? By sharing other’s content? By mixing in some personal with the professional?

If you’re strategic about how you earn them, you will keep them engaged, which leads to conversion and retention.

Don’t just do everything above and forget about the conversations. This means replying, reaching out, tagging people in conversations, and helping others share their content.

This is definitely a “you scratch my back, I’ll scratch yours” environment.

Think about how your social media efforts will continue to evolve in 2014.

Will you figure out the conversion funnel? Will you become more engaging? Will you share more about others?

Whatever it happens to be, be strategic about it. Stop and think, “To what end am I doing this?”

When you have the answer to that question, you’ll have success in your social media efforts.