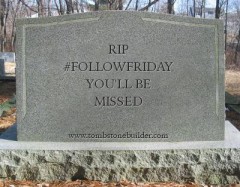 In 2008, when I hung out on Twitter a  lot more than I do today (sad face!), I created a spreadsheet of my followers (nerd alert!).

On the spreadsheet, I had where they lived, the industry they were in, and a couple of columns with hobbies and interests.

I did this for the sole purpose of being able to give people a reason to follow them during #FollowFriday.

Of course, my spreadsheet wasn’t scalable and because I’m not a programmer, I couldn’t create an algorithm to do that for me. So I took #FollowFriday to this very blog and began to recommend one person every week.

Fast forward five and a half years and that feature is one of our most popular blog posts every week.

You love it. We love it.

But there comes a time in the life of content that it is meant to change.

Death of the Spin Sucks #FollowFriday

So today we are going to bury the weekly #FollowFriday recommendations.

Never fear! A new series will replace it, and will still recommend one person for you to get to know a little better each week.

You’ll learn a bit more about them, where to find them online, and have the opportunity to connect with them in the comments.

The only difference is it won’t be a surprise to the week’s featured star as we will have sent them a list of questions ahead of time.

Before we launch it, though, we need your help.

Birth of the Spin Sucks Inquisition

The series will be called the Spin Sucks Inquisition…and it will be just that. An inquisition into the things you wouldn’t normally learn about a person in their daily online dealings.

We’ll have five set questions we ask every week and you get to vote on what those questions will be (or add your own!).

Following is the list we created. You can vote on these or add your own to be voted on. The five with the most votes will win a spot in the Spin Sucks Inquisition.

I am sad to see #FollowFriday go, but think this is going to be a fun new series while still introducing you to someone new each week.

We’ll begin the Spin Sucks Inquisition next Friday with our new shared media manager, who starts with us on Monday.

Vote early and vote often (we are, after all, headquartered in Chicago)!

Special thanks to Dallas Kincaid for helping us brainstorm some ideas!