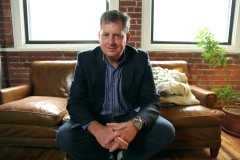 Many, many years ago, I came across John Jantsch, the founder and author of Duct Tape Marketing.

I’ve also always really respected the fact that, while he’s been active in social media, he’s been able to stay above the high school mentality of it all.

During Social Media Marketing World in San Diego a few weeks ago, I had the sheer pleasure of not only meeting him in person, but spending a few hours over dinner with him.

We discussed Twitter in the good ‘ol days and what he’s done to take back control of his experience, the experiences his kids are having right now, how to build a business of brand ambassadors, and even businesses he’s invested in, such as Ship and Dip.

He also hails from my old stomping grounds of Kansas City so it was fun to talk about the changes in the city.

Now it’s your turn to get to know him. Welcome John Jantsch to the Spin Sucks Inquisition hot seat!

I’ll let you know when I make one!

Okay, maybe early on in my business I was eager to take on any client I could get and that eventually led to some clients I did not enjoy working with. In one case it even led to testifying before a Grand Jury – but that’s another story.

I’m actually kind of an introvert. I know, I speak and sell and even perform music in public but some of my favorite days are those when I get the office all to myself so I can fumble around hacking some code.

That’s a really tough one because I can’t say I have any idea of what a list of everything I ever wanted in life looks like, so I’m going with no – I’ll enjoy the ride as long as it lasts and make sure that everything I get on that ride is everything I want!

You can’t sell using social media. Of course you can, just change your view of what selling is

Antifragile by Nassim Nicholas Taleb. I’ll read anything that looks at systems in new ways.

Because it’s impossible to have a relationship with someone who is trying to manipulate how you think.

Where to Find John

John, like any great marketer, can be found all over the web.

He’s on Twitter, Facebook, LinkedIn, Google+, his blog, and you can buy one of his gazillion books on Amazon, including his latest, Duct Tape Selling (available May 15).