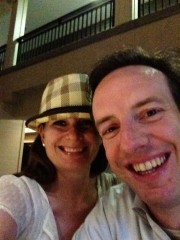 Fifteen years ago, I was in a dance club in Kansas City. I had just discovered my boyfriend was cheating on me and I was blowing off some steam.

My girlfriends were there with either dates or boys they’d met that evening and I was looking for someone to dance with me.

From across the other side of the club, I saw this really tall, striking man. I pointed at him, he looked around and motioned, “Me?” I nodded and he came over to me. We danced the night away.

At the end of the night, he asked for my phone number. He said, “It’s my nephew’s first birthday and I’m going home to celebrate with him. So I won’t call you until I get back.”

He kept his word and, while we didn’t start dating immediately, we became fast friends.

About a year later, he moved to Washington, D.C. and I moved to Chicago.

It was then we decided to date. I guess long-distance was less of a commitment for both of us.

And the rest, as they say, is history. It is with that story that I’d like to introduce you to one Kelly Dietrich, aka Mr. D., in the hot seat of the Spin Sucks Inquisition.

There have been plenty of mistakes and “biggest” can mean a lot of different things.

The mistake I remember the most was on my first real campaign in 1999. I was finance director for U.S. Congressman Dennis Moore in Kansas City.

That title sounds way more fancy than it was.

Our “office” was the basement of the Congressman’s house and I was the only one on the campaign for a year.

However, it was a big race at the time and I loved that job.

The Moore campaign and everyone on it were special.

Dennis was the first Democrat to win this very Republican seat in a long time. No Democrat had held it since the first Woodrow Wilson administration.

Because of this, a lot people in the district thought we got lucky winning and that we’d be out in the next election.

Elections are expensive and at the Congressional level you need a lot of donors.

We held events constantly and we’d always try to put together an impressive host committee to list on the invitation as show of the support.

One morning, sitting in the downstairs office solo, I get the angriest call I’ve ever received in my life.

One of the host committee members of an upcoming event was upset.

No, upset is too nice of a description.

He told me his name and asked if I knew what I had done.

Apparently, he was positioning for a judicial appointment, which was controlled by the Republican governor, senators, and other GOP lawmakers.

By being listed on the invitation and seen as supporting a Democrat, he was convinced he would lose his chance at the appointment.

Needless to say, I was felt horrible. I was embarrassed, appalled and ashamed.

At 24-years-old, I thought I had ruined this man’s life goal and dream of being a judge with one careless and simple mistake.

I am certain there may have been a few times in my life when I felt worse, but none come to mind.

When I called Dennis to tell him how I, the new kid he took a chance hiring and trusting to run the show, had royally screwed up and ruined his friend’s life’s ambition, he handled it incredibly well.

It turns out that the guy was a little full of himself and not going to get the appointment anyway.

But, the take away was huge for me.

I once hiked across the Alps with an alpaca farmer, two Chinese monks, and their pet guinea pig.

Kidding, it’s that I can make up a great story on the fly.

This is a tough one. I’ve read the dilemmas others have had on this question.

If it means curing cancer, ending hunger, establishing world peace, plus getting six seasons and a movie (that’s an inside joke for the “community”) then of course, take the 10.

If we are talking personal goals as related to career, then no.

I’d rather have the 10 years to spend with my family and friends enjoying each other, laughing, and making memories with the people and things that really matter.

“Never believe a number that ends in zero.”

Campaigns are multi-million dollar small businesses that pop-up over night, and run for a very short and limited time before knowing if they have to fold up shop the next day, or keep going for a couple more years.

Planning, tracking, and adapting every aspect of the campaign is critical to winning.

They might have raised $8,562, or made 63 calls, but that’s a big difference when the stakes are so high.

As I learned from my big mistake above, small details matter.

In the spirit of full disclosure, I know the author pretty well. She’s knows her stuff. I’m impressed by her daily.

(I, Kelly Dietrich, do solemnly swear and attest under penalty of law that I was not paid, threatened or coerced in any way shape or form to write the answer to this question.)

Oh, and you should also check out, Twelve Years a Slave by Solomon Northrup.

In business and in politics, spin sucks for the same reason.

Trust is not easy to establish and can been lost very quickly.

Blatant false spin only serves to create more mistrust, undermine the integrity of you and your industry and reinforce negative stereotypes.

Where to Find Mr. D

Like many small businesses, they can’t afford to hire staff to help them with field, media, fundraising, and more.

GetElected provides online training so they gain the skills they need without large overhead.

With that said, you can find Mr. D on Twitter, LinkedIn, Google+, and on his blog.

And, while you’re leaving him a comment, wish him a happy birthday! He celebrates on Sunday.