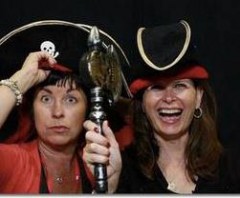 Though Lindsay Bell-Wheeler is not unfamiliar to most of you, because we launched this new series well after she started here, I thought I’d go back and highlight employees who were once featured in #FollowFriday.

I met Lindsay on The Twitter back when she was at Radian6 (which feels like a thousand years ago) and then followed her to Jugnoo, who became a client shortly after she moved there.

Of course, the moment she became available on the job market, I grabbed her. We couldn’t afford her full-time at the time, but I knew we couldn’t let her go.

We hired her part-time, with the promise to make her full-time within the first 90 days. I kept up my end of the bargain and 19 months later, she’s rocking content for us and for our clients.

Lindsay is one of my most favorite human beings on earth. She’s smart, she’s savvy, she’s creative, she can brainstorm better than most, and she’s super fun to tease (mostly because she takes it well and dishes it right back).

I asked her to take her turn in the hot seat for today’s Spin Sucks Inquisition.

I hope you learn a new thing or two about her.

This is a funny one (funny strange, not funny ha ha), because for the better part of my career, I always thought this “mistake” was a positive. I only realized this was a ‘mistake’ after many years had passed, and after I had gained so much more experience in the workplace, and of course, matured personally as well.

Definitely, my biggest mistake in the early days of my career, in TV Land, was an overabundance of ego. Mixed with a healthy dash of hubris. I look back on it now and I’m actually quite embarrassed, but at the time, I honestly thought I was being a strong, confident, professional woman.

I’ve always been a fighter, all my life, and I just kept on fighting, even when it was A) not necessary and B) completely detrimental to my career.

I had a very successful career in TV land – which makes me wonder how much more I could have achieved had I only realized back then that my ‘strong confidence’ came across as ‘arrogant female dog’ness’.

I’ve actually never admitted this before publicly. So, hey, catharsis!!

Probably that I’m excruciatingly insecure. I mean, people who know me, know, but people in the digital space will probably find this surprising.

It, of course, ties in perfectly with my ‘biggest mistake’ above – because while I’m painfully insecure – and I mean about everything – I have spent the better part of my life hiding that fact, and not letting it cripple me. And I definitely went far overboard in that regard when I was younger.

But it’s very, very difficult for me.

But, one thing that’s fantastic about getting older? You start to care less about other people and what they think. And you definitely start to love yourself more.

THIS QUESTION DRIVES ME CRAZY!!! There are way too many variables! By “achieving everything” – does that mean I can become a multimillionaire? And by dying 10 years younger. Does that mean I die at 80 instead of 90? If the answers are yes, then definitely!

Or, will I be healthy? What if I say no, and then end up spending the last 20 years of my life as an invalid?? Or, I say yes, only to discover that I was meant to exit this mortal coil at age 65!! So, minus 10 years, and good grief – I would only have eight years left! Do you SEE the way my mind works?? Now I’m wrecked for the rest of the day.

I must be in a good mood today, because I’m finding it hard to think of one!

Normally I’m such a critic!

I suppose, and this is more of a big picture view, but man, there’s so much negativity in the social media space these days.

I feel like I’m back in high school – no, GRADE school – some days. I get it that people are competitive, and it’s a dog eat dog world, but the constant criticism and nit picking that seems to go on, tearing each other down, I find it really quite exhausting.

I just don’t have time in my day to waste looking for someone’s mistakes, or making fun of their most recent business venture.

It’s easy to forget that there are human beings behind those blog posts/social media updates.

People aren’t perfect. I know I most certainly am not.

Definitely Five Days at Memorial: Life and Death in a Storm-Ravaged Hospital.

This book outlines the horror, and the tragedy, that was Hurricane Katrina, in New Orleans. I have watched Spike Lee’s “When the Levees Broke”  twice already…and now want to watch it again.

Katrina was a disaster of such unfathomable proportions – I went into this book 100 percent on the side of the health care staff.

Then you read it – and you’re so conflicted.

The author reels you in with sympathy for what the brave nurses and doctors at Memorial went through during those days – no power, no food, the sickest of patients, bureaucratic bungling from every level – but, quite brilliantly with her reporting and by way of her story telling, by the end of the book….you’re not really sure what you think.

Were the doctors right in the steps they took…? Was it mercy killing? Or murder?

It’s a brilliant journalistic exploration of what happened, the PR nightmare that ensued, and the trials of some of the key players.

You will not know which end is up after reading this book.

For me, personally, spin sucks because I despise cheats and liars. I really do. Like, viscerally. It’s way too easy to cheat and lie. Except for the part where you have to be sure and remember to whom you told which lie!

It’s the lazy man’s way of life. Whether you cheat your way to the top, or lie your way out of a scandal, spinning the truth speaks volumes about a person/brand’s character.

Trust is very important to me. If you have my trust, I will go to the ends of the earth for you – I will buy your product faithfully. I will support you personally. I will even give you second chances when you fail – because, as I mentioned above, people are flawed.

It’s what makes them so interesting. But, make those mistakes, and use spin to deke and dive – and you will be exposed eventually – then you’ve lost me.

And I don’t think I’m an anomaly in this regard.

Where to Find Lindsay Bell

Lindsay, of course, can be found on Spin Sucks, as she is the content director.

If you don’t already know her, stalk her online, introduce yourself, and get to know her.

I promise you, you won’t regret it.