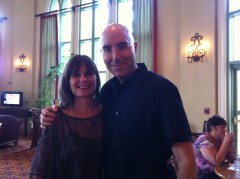 I was OVER THE MOON!

I wrote about speakers not wearing jeans on stage and Mitch vehemently disagreed with me. I didn’t care.

Fast forward to October 2011 when I was in Orlando for the PRSA International conference.

Mitch tweeted us was there for another conference and wanted to know who was hanging out at the neighboring hotel.

I was! And we got to meet in person.

Since then, we have spoken at several of the same conferences and have become friends. In fact, we joke we are social media married.

I’m very excited to have him share a little more about himself today.

Ladies and gentlemen, Mitch Joel is in the Spin Sucks Inquisition hot seat!

This one goes back to right before I joined Twist Image. I had left a job I held as an account executive for a PR firm.

I decided  I wanted to do something entrepreneurial again, so I set out to start a record label. I was introduced to someone in another city, and we hit it off. We actually got the record label off the ground, secured major label distribution with one of the biggest record companies in the world and even got a handful of bands to sign with us.

As the record label progressed, I met my current business partners at Twist Image. I wound up ditching the label to focus solely on Twist Image.

A few months after I took that decision, one of the bands we had signed to our record label took off. Now, my former business partner at the label was a sole proprietor and living the life.

At the time, we were struggling to build Twist Image.

In hindsight, I’m still fine with the decision that I took, but I think it was a mistake. I could have held on and done both – without there being an integrity issue. I think it would have been good/beneficial for both this record label and for Twist Image.

We sometimes let go of business opportunities   that are based solely on gut or feelings. It would have been wise to take a step back, get some outside advice about the situation and then make a more tactical/practical solution.

Thankfully, it all worked out in the end – the label is still flourishing, as is Twist Image, but it would have been nice to have been there – at the label – to see my hard work come to fruition.

I am very introverted and socially shy.

I know, this is all the rage to say now that Susan Cain is such a well-known author (her book Quiet is massive) and TED presenter, but it’s true.

I struggle with how to wiggle my way into conversations at events and, while it’s fun to be on stage and presenting, I really grapple with what happens when a lot of people are in a room networking.

And, as much as I talk to people about knowing their elevator pitch and stuff… I often find mine to be a little inauthentic… but I’m working on it!

Yes. Without a doubt.

Don’t get me wrong: Totally scared about dying and being sick. Still, I think a life worth living is much better than just trying to live a whatever kind of life.

I was just telling someone over breakfast that my life (and mortality) is something that I am acutely aware of and – for better or worse – it informs a ton of my decisions about life.

The entire RFP process. From top to bottom, it makes me sick.

I don’t find it to be a legitimate or accurate way to figure out if a brand and agency can play together nicely.

Not sure why it’s not as simple as some informational meetings and then working together on a project.

Right now, we live in a world where brands see choosing an agency as this strange Hunger Games-like process of pulling out a ton of free strategic and creative work, and then making a decision based on hardly doing any type of work together.

It’s brutal. And that’s my PG way of saying how messed up it is.

The Circle by Dave Eggers.

I hardly ever read fiction, so I may be way off base on this one.

I loved how Eggers tells the story of people in a connected world. It’s total fiction about a company that could be Google… or Facebook… or Twitter… or one of those Silicon Valley behemoths, and what happens when what we share becomes who we truly are.

You read this book, and say to yourself, “this could never happen!” and then, sure enough, the next day something real and tangible happens on one of these social networks and you feel these scary fables creeping into reality.

It’s one of those books that I think about almost daily, because that fiction is becoming a reality.

I can’t say it better than the way Jeff Bezos from Amazon said it.

Spin sucks because it’s based on the notion that the product/service isn’t as good as the communications about it.

Now, the true role of communications isn’t about spin, but rather helping people to know the true story. The true story doesn’t need spin. If it does, then it actually sucks… which means that spin sucks too. Get it?

And there you have it!

You can find Mitch on Twitter, Facebook, LinkedIn, Slideshare, Google+, and his blog (where he writes every, single day).

You can also read Six Pixels of Separation and Ctl Alt Delete and listen to his weekly podcast.