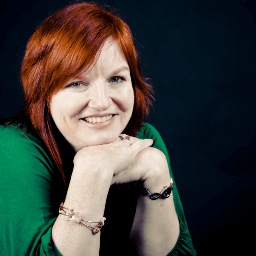 The very first time I got to hang out with Sherrilynne Starkie—after stalking her for years on Twitter—was when Thornley Fallis invited me to Ottawa to speak and she and her team took me to dinner.

We sat outside, on the bank of the river, and chatted like old friends.

And since then, she has truly become an “old” friend (in time, not age!).

She is one of the communicators that, though not a digital native, has made the transition brilliantly. In fact, when she moved back to Canada a few years ago, she used Twitter to launch her job search.

This was back when NO ONE was doing stuff like that and it was pretty incredible to watch.

It’s shameful she’s not yet been on the Spin Sucks Inquisition hot seat. We shall remedy that today.

I stayed five years in my first agency job.

I was a writer and was dependable and productive and unfortunately that hampered my early career progression.

But still, five years is a long time to feel frustrated and resentful…I should have left after three years.

For the last 10 years I’ve chronicled my life in social media so I have few secrets.

But, if you’re ever in stormy seas, you want me aboard.

I don’t get to sail that often anymore, but I do love it!

I’ve pretty much already achieved everything I ever wanted in life.

So no, I wouldn’t make that trade. I want to be here as long as I can so that I can be part of my grandchildren’s lives and watch them grow up.

This is 2015 and women have dominated this profession for the past 25 years or so.

Why do we stand for this?

I ask agency executives everywhere to please put a spotlight on this practice and work to correct it.

Let’s base pay on performance only.

I really enjoyed No Relation, a funny novel by Terry Fallis, a founder of the agency I work for.

Terry’s a best-selling novelist and has won a ton of literary awards. His past novels have been made into TV shows and musicals.

It’s laugh out loud funny, and I spent an enjoyable summer weekend reading it in the hammock in my backyard.

I hate the term and concept of spin.

It implies dishonesty and frankly it’s disrespectful, not only to PR professionals, but to the people in our audiences.

The PR pros I’ve known and worked with over the years are smart, hard-working individuals who are passionate about organizational communication.

They are not the lying, manipulative douches nor the vacuous, drunken blondes that Hollywood continues to portray ad nauseum.

I mean, I can take a joke and all, but wouldn’t it be refreshing to see our profession depicted a little more accurately once in awhile?

Where You Can Find Sherrilynne Starkie

Sherrilynne is an executive vice president at Thornley Fallis, where she works with my buddy and Inside PR co-host, Joe Thornley.

She also is the president of IABC Ottawa and is using Periscope to address the chapter every day. I could not be more proud!

You also can find her on: