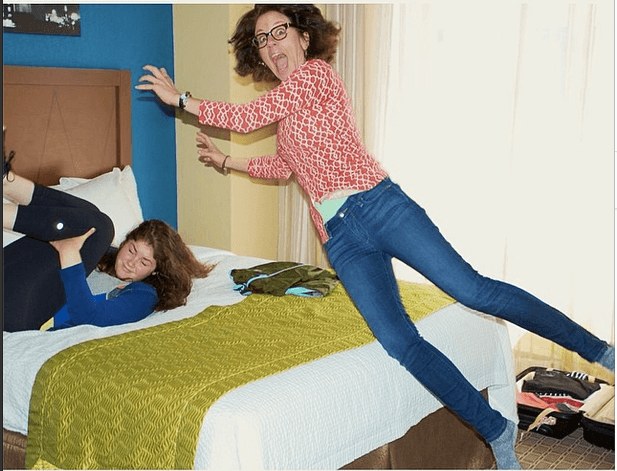 A few years, after stalking Ann Handley online for centuries, I saw her speak. And then I rushed the stage and got up there with her to say hi and introduce myself before the rest of the attendees got to her.

For those of you who know I’m an introvert and extremely shy, this was a crazy, bold move for me.

But I have a serious girl crush on her and I wasn’t going to let the opportunity pass by.

Here is what I remember about that meeting that will never fade from memory: She’s wicked smart, she’s a great speaker (and funny!), she can wear boots like nobody’s business, and even though she thinks she looks like Tina Fey, I think Tina Fey has nothing on her.

You can imagine how excited I was when she agreed to take part in the Spin Sucks Inquisition.

So here she is, Ann Handley…on the hot seat!

I’m tempted to say I didn’t trust my own instincts enough. But I suppose most people have to learn that the hard way. (And those who are born ultra-confident in their decisions from the get-go probably turn out to be insufferable human beings.)

In other words, I’ve learned a lot from the mistake of not trusting myself (and other mistakes I’ve made). So not to get too philosophical, but would that still categorize them as true mistakes? Or are they now instead small turning points that have accumulated into a kind of wisdom?

I guess I’ll have to ponder that on my time… not yours.

I just turned to my daughter Caroline and asked her this question, because I honestly have no idea. Her response: “That you’re weird.” So, there you go.

Also: I have an irrational fear of flying (but still I do it all the time).

I’m a terrible procrastinator (but still I get a lot done because I also have a strong work ethic).

I’m an introvert (but I play an extrovert easily, until suddenly I can’t and I need to go lie down on my bed for three days).

I’m a bit of a contradiction, but I guess that goes without saying after this paragraph, doesn’t it?

And finally, I was so ridiculously shy as a child that I now realize I was a very weird kid. Way weirder than my teenager now thinks I am. For the record.

My own parents died when I was young, and I wish I had 10 more years with each of them. (And that’s a colossal understatement.)

In the late 1990s, I started working in, what was then, the fledgling Internet marketing industry.

Overnight, self-proclaimed “digital marketing” gurus popped up, who could help businesses do magical things with the Internet.

I have no problem with legit experts (even when they call themselves “gurus” – eww). But many are not.

I just re-read A Year in Provence, by Peter Mayle – a book I first read about five years ago. If you don’t know it, it’s about an advertising guy who ditches Madison Avenue and moves to the south of France with his wife and two dogs to start a new life in a small village there.

I really like storied autobiographies – I’m always curious about how life shapes people – but Peter’s vignettes are especially compelling because who doesn’t sometime fantasize about chucking it all and drinking wine in a two-centuries old farmhouse? Or is that just me?

Because “spin” shouldn’t be part of any marketing effort. The best marketing simply tells a true story well.

Where You Can Find Ann Handley

She also is the co-author of Content Rules (if you haven’t read it yet, it’s a must) and the author of the forthcoming Everybody Writes: Your Go-To Guide for Creating Ridiculously Good Content (later this year).