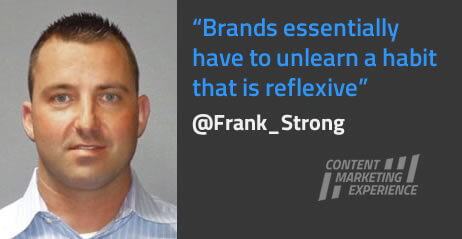 I still remember the exact moment I met Frank Strong. I spoke at the (then) Vocus Conference and he greeted me with his cheerful face and a real hug.

He was always a special member of the PR community here and in other places I hang out, but that really solidified it for me. As I was leaving the conference, I ran into him again in the parking garage and got to have a conversation about his daughter.

Trust me, that is something you want to experience. His entire face lit up.

He is a PADI Master SCUBA Diver (that just sounds impressive!), a Major in the Army National Guard—and has been stationed in Iraq and Egypt—and he likes to jump out of perfectly good airplanes. I’ll never understand why, but I hear it’s a thing.

And here he is…hanging out on the Spin Sucks Inquisition.

The biggest mistake I’ve made is jumping ship from a large firm to go with a start-up consulting company. The founder was associated with one successful exit on record and I thought this might be my chance to get in early on a new venture. It folded after six months, and the closure seemed to me, to have more to do with heart than finances.

Still, I don’t regret it. I wouldn’t be where I am today had I taken a different path. That’s true of every mistake.

It reminds me, that as a kid learning to ski, I’d relish an afternoon on the slopes without a tumble. My father, in wisdom I wouldn’t appreciate for years to come, would note to the effect, “You have to fall down 1,000 times before you’re an expert.”

Mistakes are the building blocks of experience. It’s not that we make mistakes—it’s what we learn from them—that matters most.

I’ve served in uniform—in the reserve components—for more than 20 years, including a couple of overseas deployments.

It’s really a second life, though much like the lines between personal and professional social media have blurred, I’ve noticed a similar blurring between these two “lives.” The military asks more and more from its reservists and it’s pretty challenging to avoid overlap.

Still, I try to find ways to apply what I’ve done in uniform to my civilian career. Certainly there are characteristics that are entirely applicable—leadership, perseverance, and adaptability—but so too are critical thinking skills: Communicating intent, problem solving, strategic planning, and anticipating the second and third order of effects of tactics or policy.

That said, I’m pretty close to the end and plan to hang up the monkey suit in a few months.

“Everything you ever wanted in life” is liable to change every few years. In my mind, it’s not possible to make such a deal and understand precisely what one is giving up.

A mentor of mine once described life as a “collection of experiences” and what you would unknowingly give up for such a deal, is akin to missing most of the magic in life.

The faux corporate mistake, which goes something like this: Company makes a “blunder” in advertising or social media. The social media mob responds with rage. The company either doesn’t respond or stands its ground.

The news goes viral on mainstream sites, as reporters are especially susceptible to fall for this ploy.

After a week, the company retracts the offense, duly apologizes, and repeats the process in another six months.

The clothing retailers have made this stunt into a science. The next time you see this, hold the anger and respond instead with silence.

“Think like a Freak” by the authors of Freakonomics.

There’s something vivid about looking at problem empirically and the authors challenge readers to think differently.

Here are a few of the passages I highlighted in my (analog) copy:

…until you can admit what you don’t yet know, it’s virtually impossible to learn what you need to.

Despite spending more time with themselves than with any other person, people often have surprisingly poor insight into their skills and abilities. [citing an unnamed academic journal]

It takes a truly original thinker to look at a problem that everyone else has already looked t and find a new avenue of attack.

…if there is one thing we’ve learned from a lifetime of designing and analyzing incentives, the best way to get what you want is to treat other people with decency.

The book moves from anecdote to anecdote rapidly so it’s a quick read and well worth the investment of time.

Everyone has their own version of the truth, usually rendered in a form that is shaped through the lenses of a personal world view.

Anyone can fairly argue facts, advocate for ideas or champion a cause—there are degrees of variation in truth based on our personal bias.

It’s natural to have bias, but spin isn’t even an attempt at honesty.

There’s no greater opportunity in PR or business today.

Where You Can Find Frank Strong

You can stalk Frank on:

You can also check out his pet project, the Business of Law Blog.