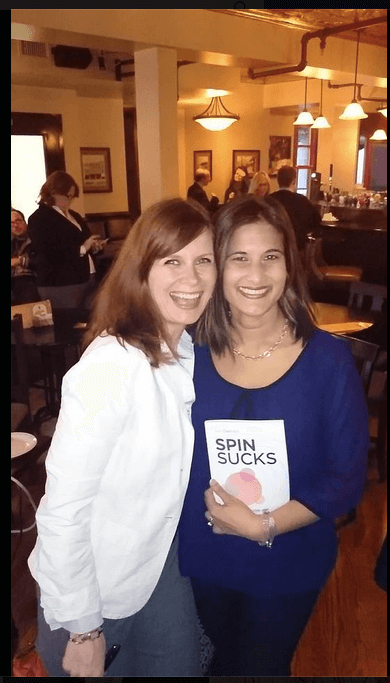 Lubna Sadik is one of my most favorite people on earth. Not only is she pretty and kind and giving, she is ridiculously smart.

She is one of the early Spin Sucks brand ambassadors and I’ve had a couple of opportunities to hang out with her in person in Ottawa, Canada (which is where she lives).

You likely know her from blogging here from time-to-time. In fact, she has contributed one of my favorite guest posts that highlighted her mom’s business, Dyslexia CARE.

Though I featured her a couple of years ago in the #FollowFriday, she has not yet been on the Spin Sucks Inquisition.

Someone once advised me, “If you haven’t moved up within your organization in two to three years, it is time to look elsewhere.”

I regret not following that advice earlier. I stayed at a couple of organizations a lot longer than I should have. The learning curve was long over and there was no scope for upward mobility.

However, I also realized I had made the mistake of not clearly asking for what I wanted.

The onus isn’t on your supervisor to know your career goals and ambitions.

You have to be specific and ask for what you want.

Then, you must commit to doing whatever it takes to get there.

If it’s clearly stated in your development plan and you’ve done everything it takes, and then if your supervisor or organization doesn’t keep their end of the bargain for reasons they can’t explain-it’s definitely time to leave.

That I’ve lived approximately each decade of my life in a distinctly different place.

I was born and spent my early years in Karachi, Pakistan, where I was schooled in the British education system.

I then moved to the Boston area where I completed my secondary and undergraduate university education.

Then life brought me to Canada and I had to re-learn spelling “color” with a “u” in it.

I spent the first decade of my working life in Toronto.

And, for the last 10 years, I’ve been in Ottawa…. which means I’m getting antsy, very antsy, especially with the dreaded winter almost in arms’ reach.

I am headed to San Francisco next week and I’m tempted to just stay.

If You Could Achieve Everything You Ever Wanted in Life but Had to Die 10 Years Sooner, Would You Make that Trade?

I don’t think it’s possible to achieve everything I’ve ever wanted in life by a certain time because my goals and wants continue to evolve and change with time.

Also, having kids has changed my perspective a lot. I want as much time as possible with my boys.

You know when you meet someone for the very first time and the interaction is a full-on sales pitch.

They’ve already lost me. I have already tuned out.

First impressions do count. Chances are even if they were selling something of great value to me, I’m no longer interested.

I am surprised more people don’t realize the value in building a relationship first before asking for a favour.

Past six months?  I guess this means I can no longer use Spin Sucks as an answer here to get brownie points.

I finally got around to reading Jonah Berger’s Contagious.  I had heard fantastic things about it. Full of great case studies and tips, it lived up to expectations. It’s about why ideas catch on and what makes videos and stories go viral.

I’ve just started listening to Amy Poehler’s Yes Please.  Although I am trying very hard not to compare it to Tina Fey’s Bossypants (you hear both these ladies’ names together so often, sometimes it’s hard not to make the association), I am quite enjoying it so far.

Your target audience is smarter than you think.

Respect them by being honest and straightforward with them. It’s amazing how understanding people can be when you are transparent  and  upfront with them.

Where You Can Find Lubna Sadik

Lubna also is doing some work with us on the Arment Dietrich side of the business.

Remember how I said she’s ridiculously smart? Yeah, we get to experience that every day and it’s incredible.

You should be jealous.

To get to experience some of her brain, you can find her on: