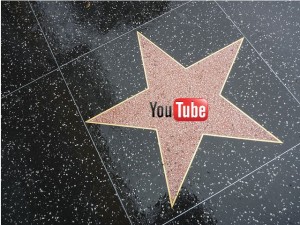 Last night, Joe Jaffe, Alan Wolk, Bob Knorpp, and I recorded episode 207 of BeanCast, in which we discussed whether or not size matters.

We talked about Facebook and mobile payments and the right time of day and week to update your social networks. But the portion of the podcast I found most enlightening was when we talked about fame from YouTube.

A few weeks ago, YouTube launched its partnership program, which is meant to help video creators either amplify their work or create a YouTube-based career.

When it was launched, people were optimistic, but cautiously so. It seemed like a good idea, but no one knew who it would benefit: YouTube or the “star.”

But the numbers are coming in now and it seems like both are benefiting.

We began this conversation around whether or not the act of helping partners create better channels helps advertisers feel more confident about spending money. We discussed whether or not the quality of the content has improved that much or is it just because it’s better aggregated. We even looked at whether or not the marketplace for connecting talent with brands is important.

I was asked the partnership question first, and my perception is – just like on Facebook – we are not the customer. We are the service and YouTube needs us to create more videos so they can sell against it. It makes sense to me the more content they have, the more they can make on advertising.

But what I didn’t see coming was Netflix and Hulu.

Alan Wolk works for Kit Digital, a company that is working to move video from television to phones and tablets. It’s enabling social TV. And it’s helping traditional broadcasts find their way to multiple screens.

So I’d venture to say he knows what he’s talking about when it comes to video.

And he said all of the reasons listed above that YouTube is doing this are correct and because Netflix and Hulu have figured out the streaming game and Google wants in on it.

But YouTube has something neither Netflix or Hulu have (who seem to be placating the old guard). They have young, new stars with built-in communities, fans, and followers. They have millions of views and they’re famous in their own rights.

They are becoming the new Hollywood, the new country, the new TV.

These young stars are interviewing metal musicians and making $4,000 a month. Corporations are paying six figures to get some of them in commercials because of their YouTube fame.

This is what is happening in the publishing world…and in music, too. Publishers are working on books with bloggers who have already established a community and already write consistently. They know this is the direct method to sales; not the old way of doing things.

And in music we had Napster that disrupted the industry entirely and paved the way for Spotify and Pandora. But both of those services are still placating the old guard, which means  they’re not doing as well as YouTube.

It’s an interesting world we live in…and it’s about to get even more interesting. These industries won’t die, but we’ll see a ton more evolution out of them before they settle.

Perhaps even one of you will become the next YouTube star. It’s certainly within your reach!