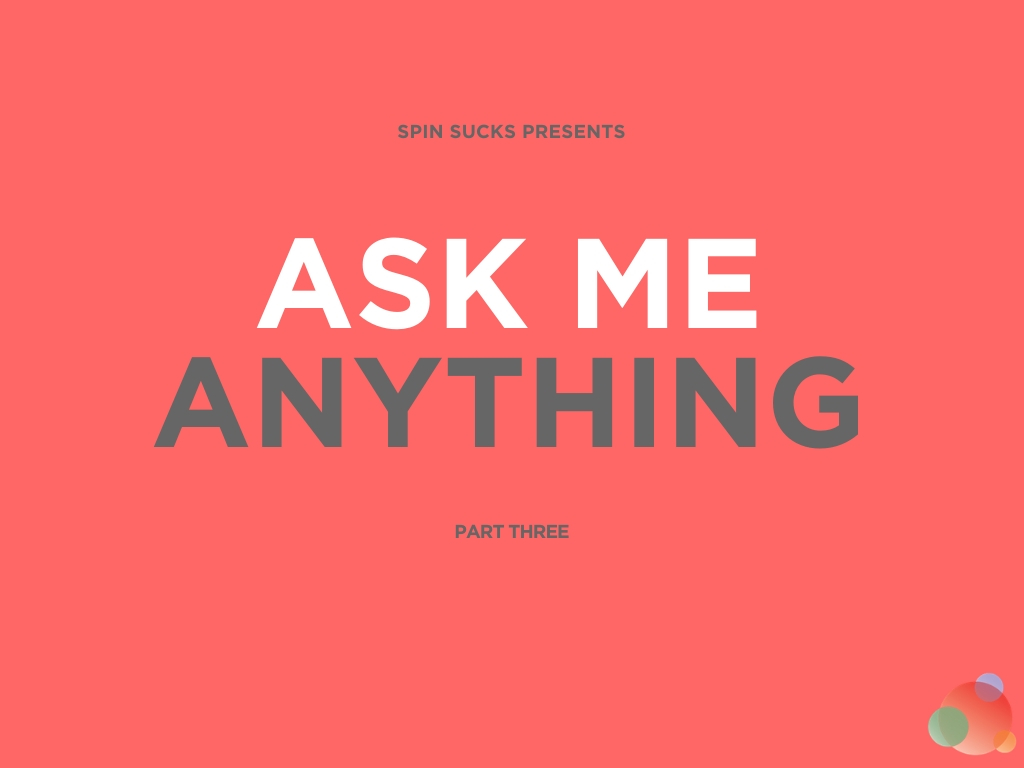 This has been a week of Ask Me Anything.

We started on Tuesday with a recap of this week’s Spin Sucks podcast episode. Then yesterday we took on the questions that we weren’t able to answer in the podcast episode.

But there is one person who asked several questions that I just knew were going to take a significant amount of my time to think through answers and provide something of substance for you.

For that, I’d like to thank Christopher S. Penn.

If you know him, it’ll come as no surprise that he asked heady and intelligent questions. It will also not surprise you that some of the questions get to metrics and business-related issues.

So here it is…a weird “chat” with Penn and me…without our actually having to talk.

His first Ask Me Anything question:

In your perspective, how will influencer marketing change in the next 12-18 months? What’s going to blow up, what’s going to fizzle out?

As much as I really, really, really hate to give any ink to Macy’s, they’re crushing it with influencer marketing right now. And I think they’re on the cutting edge of where it’s going in the next 12-18 months.

(Sometime I’ll tell you the story of how they came into Chicago when they bought Marshall Field’s and hired us to help them to get the messaging right…and then never paid us for our work.)

I’ll set aside my moratorium for sake of talking about where things are headed.

They are using their own employees as influencers.

The Atlantic did a story on it a couple of weeks ago.

Weary of celebrities who demand high salaries and unreliable Instagram “influencers,” Macy’s is making it possible for its own employees to serve as its brand ambassadors, through a project it calls Macy’s Style Crew.

I’ve always said your employees are your best brand ambassadors. Using them as influencers is brilliant.

And it’s not just Macy’s. Modcloth, Sephora, Maker’s Mark, and Tommy Hilfiger are all trying their hands at employee and customer influencer campaigns.

That’s where I think this is headed. It doesn’t make sense to hire someone with a large following to tout your brand—particularly if they aren’t users of it.

Someone who works for you or buys from you, though?

The second Ask Me Anything question is about traditional media relations:

In a world where publications are dying off at a rapidly increasing rate or being bought as the pet projects of billionaires (see Benioff and TIME, Bezos and WaPo), what’s the future of traditional media relations?

I’m working with a client right now that is building it’s PESO model program for 2019.

Just yesterday, we worked on how to build their media lists for the E part of the program, by being crazy targeted and specific, and without using software to build a list of hundreds of names.

The looks on their faces was priceless…and it was fun to watch them go from panic from the thought of having to “pitch” hundreds of journalists to building relationships with just a handful.

It’s definitely become more focused on contributed content, particularly as more and more publications starve for great content because they don’t have money to keep journalists on staff.

We’re also in this weird state where the Fifth Estate is being questioned by the highest office in this country.

So, while we all work to help journalism regain its credibility, and as media outlets merge, go out of business, or reduce in size, we’ll continue to see a bigger emphasis on brand-driven information.

That’s why an integrated program is so important. For those of you focused solely on media relations, your budgets will continue to shrink.

Expand your skillset and start to add the P, S, and O of the PESO model to your repertoire.

Next up in Ask Me Anything!

How important is ethics in the PR industry, and how should both schools and companies be training PR practitioners to adhere to ethical standards—especially in a world where ethics seems to have gone out the window?

You aren’t joking about a world where ethics seem to have gone out the window!

This is a conversation we had internally earlier this week.

As a brand known for almost being ethical to a fault, we have to be above reproach.

I’m teased quite a bit about this—and I’m not so naive as to think there aren’t clients who don’t want you to bend the rules a bit—but the only thing we have is our integrity.

The moment we lie about something or spin the truth, we’ve begun to lose the game. It may not happen today or tomorrow, but it will eventually catch up to us.

If you’re a member of PRSA, you are required to abide by a Code of Ethics.

Every PR course at the university level requires it, as well.

While the world may be crumbling around us–and politics and Hollywood give us a bad name—I would say the good majority of us continue to adhere to ethical standards.

And…the next Ask Me Anything question:

Deep question: what is YOUR definition of brand, how do you quantify it, and how do you improve it based on those measures?

This is not just a deep question, but a difficult one.

My definition of brand is having something that people can rally around.

For some, it’s mission-focused. For others, it’s the product or service that sets them apart. And, for others (like us), it’s vision-based.

Do I really think we can change the perception people have of the PR industry in my lifetime? Probably not.

But I do think it will happen eventually. It’s our vision and something we work toward every, single day—and our community rallies around it.

The quantification of brand is hard one. There aren’t hard and fast metrics for it. It’s more a feeling—and what people say about you behind your back.

I served on the board of a business that sold earlier this year.

One of the things we worked hard to achieve as the business grew was the brand because we knew it would help the owners get a higher value when it came time to sell.

Did it get them a full point on EBITDA? No. But it got them half a point. And, when you’re talking millions of dollars, half a point is significant.

Maybe someday there will be accounting metrics around brand. We all intuitively know you can’t achieve much without it. But, until then, it’s pretty hard to quantify.

And the very last Ask Me Anything question…but certainly not the least:

How endangered are communications professionals who steadfastly refuse to embrace analytics, data, and machine learning?

So endangered they’ll be extinct in five to eight years.

Remember when everyone rushed to open social media firms a few years ago?

How many of those still stand?

(The answer is none…unless they diversified.)

I know it’s hard to learn new skills. I know time is at a premium. But, trust me, you want to do it now while you’re still ahead.

If you don’t, you’ll not only be playing catch up, you may have to completely start from scratch.

Don’t let necessity be your driving force. Make 2019 the year you learn about analytics, data, and machine learning.

And that, my friends, is the last of this version of Ask Me Anything.

I have to thank the Spin Sucks community for the crazy smart and engaging questions…and for providing enough fodder for me to get through an entire week of blog posts.

If you’d like to participate in asking me anything—or any one of our guests—join the free Spin Sucks community. You won’t regret it.