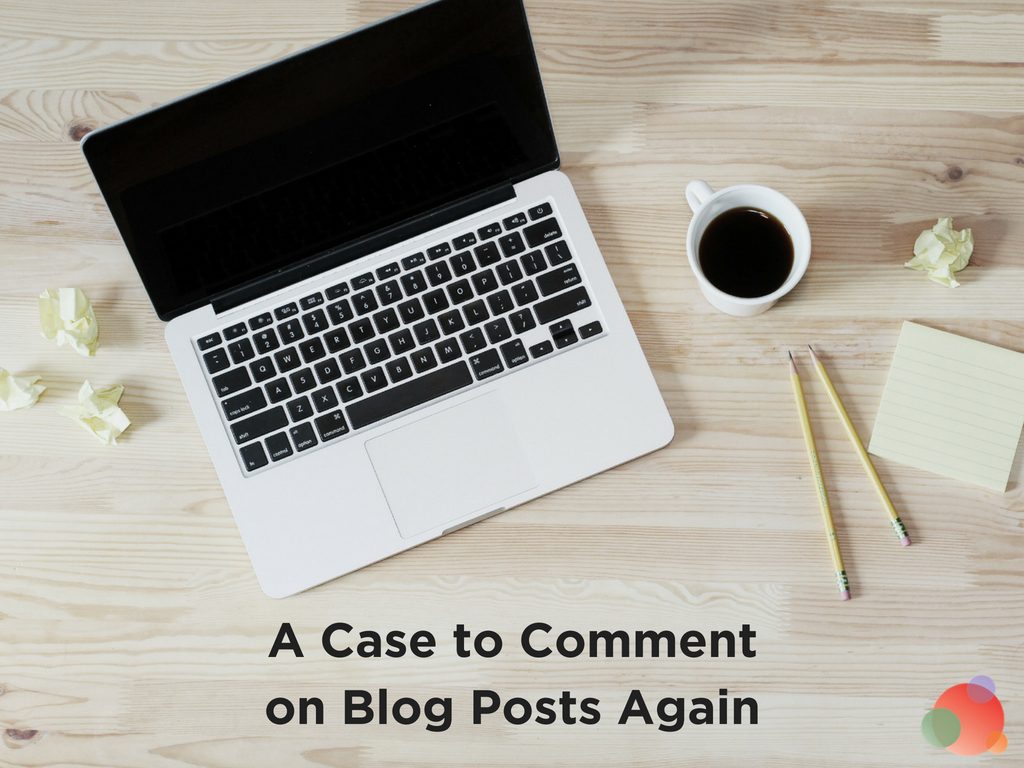 When was the last time you took time to write a comment on a blog post or article?

Maybe I should qualify that: when was the last time you wrote a comment that had nothing to do with politics? Was it this week? This month? This year?

It seems like we all do it a lot less than we used to, doesn’t it?

On blogs, it has declined and by quite a lot. Spin Sucks still sees pretty good engagement on blog posts, but we’ve noticed a decline, too!

A few months ago, I tested a theory.

I thought the decline was because people prefer “dark” social media—places such as Slack and Facebook groups, where they can have private conversations that their bosses, colleagues, and families don’t see.

And, while that is some of it, the Spin Sucks community proved me wrong.

That last one hurts my heart. Of course, our analytics prove differently, but a large percentage of people said that’s why.

Blog Comments Can Be Educational

Is it even worth while to comment on blog posts anymore?

It is. It really is!

Not just because I’m a blogger who is happy when people comment on my work, but to LEARN things.

When readers comment on our articles, it’s pretty easy to figure out if what we’re talking about works, or doesn’t work, for them.

It’s much easier to get a sense of what’s important to the people we serve. That’s valuable to any business or brand.

When I asked about this on Facebook, it’s because people seem as engaged to me as the good, ol’ days…but more so in the dark social networks.

It created a great conversation.

Some people agreed with me—but they were in the minority.

Either they’ll leave a comment and never get a response or the trolls come out and attack them or they simply don’t have anything to add to the conversation, other than, “Great article!”

When you combine that with whether or not there is a return on your time, it becomes a mass exodus from public commenting.

Of course, that supports my theory that people are still engaged in dark social, but not fully for the reason I thought.

In the private places, people know they are among their own so they’re not going to be attacked by the trolls or people who don’t understand the context of the conversation.

Had I not written about it, I would have gone on my merry way with my own theory, without testing it.

Okay, that’s great for customers, leads or audience, right? Of course you want them to comment on blog posts, but should YOU do the same?

While the glory days of commenting and having discussions on blog posts may be coming to an end, there are some powerful things you can learn by being an active commenter yourself.

What makes you want to comment on blog posts? What, personally, is enough of a push to get you to hit publish?

Look for places to share your opinion and notice what made you  want to do so.

If you’re feeling anxious about it, here are three ways for you to get out there and start making some comments.

I’ve been reading your blog for a long time (X months), this is my first time commenting, and this made an impression on me because…

Blogs and other comment-ready materials are like our babies, and we want to know who’s paying attention.

When you introduce yourself as a long-time reader, first-time commenter, you’re almost guaranteed to get a response—and start to build a relationship with the author, which is critical in earned, owned, and shared media.

And, as it turns out, blog commenters become friends.

Every, single person on my team was first a Spin Sucks engaged community member.

We always place priority on those resumes, and we rarely even interview someone who isn’t already engaged with us.

We find they’re far better suited to our culture and our organization because there is a pre-existing relationship.

But it’s not just business-related.

We can lay claim to a Spin Sucks wedding!

A couple “met” in the comments of the blog several years ago. They liked one another so much, they started to Skype. Then they flew to a mid-location for each of them to meet in person.

And the rest, as they say, is history.

I consume content that way—so many thoughts bubble up that get solidified as I continue down the author’s path.

We accept guest authors at Spin Sucks and I find myself taking notes when I read their articles, for the sole purpose of contributing intelligently to the conversation.

You can do the same—jot down a few bullet points to yourself and then use those to leave your comment.

The next step from here is to talk about how you used the information in the content to accomplish or solve something.

This is not only great feedback and information for the author, but it can help other readers, as well.

I recently wrote an article about how to get paid for your value and expertise versus by retainer or billable hour.

In the comments, a crazy good conversation was had about how to position yourself for different financial models, including equity, bonuses, and more.

Other readers asked questions and got more information and we soon had a great plan for many to try when negotiating new contracts with clients.

You can share your immediate reaction. If you agree, disagree, learned something new, have something to add.

Share a bit about yourself and why you had that reaction.

We once had a man go after someone in our community late on a Saturday night.

It was pretty clear he’d been drinking, but it wasn’t a good excuse.

We don’t tolerate that kind of behavior and we require respectful discourse.

I warned him once and he didn’t stop so we removed him.

The next morning, he emailed me to say he was trying to comment on Spin Sucks and couldn’t. I told him why. He was mortified.

He clearly could not be trusted with a laptop, access to a community, and beer.

He’s not been allowed back.

Practice What You Preach

If you’re using comments to build community and engagement, moderation is extremely important.

There are plenty of trade publications and blogs I refuse to comment on—even when they run my content—because they don’t moderate and they don’t require professionalism.

It’s not worth the energy or angst.

If you want to encourage engagement, it’s your responsibility to maintain the level of communication.

And it’s not hard.

It makes me crazy when people say they don’t do it because it takes too much time.

It takes hardly any time.

If you use a commenting platform, such as Disqus, and set your flags appropriately, you’ll likely only have to clean out bad or spam comments once a week.

All this said, a lot of the most vital conversations happening on social media are happening on the dark side, but the case is still there for you to be making, and encouraging commenting on your content.

You just need to make sure it’s worth it for your community, that it’s a good experience for them, and that you’re practicing what you preach.

Photo by Lauren Mancke on Unsplash