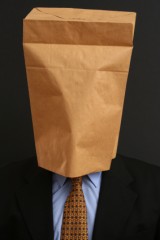 You wrangle it out of your jacket.

Reposition the grocery bags you are balancing to one arm.

Slide the text icon to the right.

Scroll up to see the unannounced number.

And you see this: 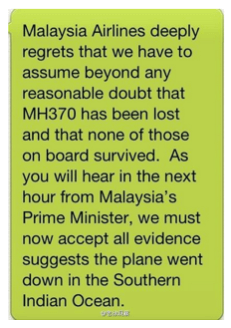 By now, you’ve all heard of the infamous text message sent from Malaysia Airlines to the families of the missing victims of flight MH370.

According to The Drum, the airlines claimed that most of the families had already been informed in person and by telephone, and that “SMSs were used only as an additional means of communicating.”

But is a text message the correct way to communicate something of this nature at all?

A Failure to Communicate

Even most teenage boys know by now not to break up with a girl through text message.

Notifying families of something on this tragic of a scale is not only careless, but displays an almost sickening indifference to the people they should have taken the most care to support.

Of course, this is not how the airline intended it. But, after weeks of communications mistakes, blunders, and an almost complete surrender of the entire story over to the media (who in many cases also removed basic human consideration of the loss, for meatier, 24 hour, on-going coverage), Malaysia Airlines wasn’t thinking of the families – they probably weren’t even thinking about how this would appear.

They were in survival mode.

Anyone who has spent any time working in crisis communications knows survival mode is not the place you want to be during a crisis.

Just like any other time we go into survival mode as humans, we stop connecting, we stop thinking clearly and with foresight, we stop being strategic, we become self-focused, and we just try to do what we can to survive.

None of these are traits you want in a communications team.

Crisis Communications in the Digital Age

The Malaysia Airlines PR team has a lot stacked up against them.

They are dealing with an unprecedented situation, in an age where news travels faster, and through more different channels than even Superman could keep up with.

We also cannot underestimate the fact they are dealing in a different culture, one that operates differently from western culture on many levels.

However, they made several crucial mistakes that could have been avoided with the right strategy:

Many others have already explored this tragedy in detail and provided clear take aways of things we can all learn from it when it comes to improving our own crisis communications skills.

Where does the airline go from here?

She reviews how to prepare, deal, and recover from a crisis.

She provided an eight-step process in her blog post on Tuesday.

Let’s say you are hired and tasked with helping Malaysia Airlines through this process.

Malaysia Airlines will continue to deal with the reverberations of this tragedy for the weeks, months, and even years that lie ahead.

How would you suggest they change the course of their communications now and begin to repair the damage that has already been done to their overall reputation?