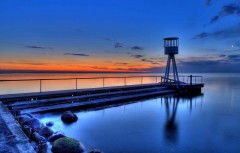 My four-plus year enlistment was a period I look at with pride and satisfaction.

It wasn’t always easy, it was occasionally terrifying, but it was always gratifying.

The thing is, my time in the Coast Guard established a baseline for how I approach crisis communications.

This baseline served me well as a newsroom manager for more than a decade, and continues to serve me well today.

Two words in a bit of Latin.

I know Spin Sucks reader Paul Rhynard knows what they mean, but for the rest of us, it is the Coast Guard slogan and means “always ready.”

In my mind, being prepared (which happens to be the Boy Scout motto), is the most important step in crisis communication.

Preparing for a Crisis

This is why you need to be prepared for a crisis: Your clients are people and people make mistakes.

Add in outside influences, and the odds are very likely you will deal with crisis more than once during your career.

What does “always ready” mean? It means you can’t possibly anticipate every situation.

In the Coast Guard, you trained. You drilled. You studied. While you couldn’t practice for every situation, your training was meant to be adaptable enough that you could deal with anything thrown your way.

Somewhere about 1997 or 1998, as a newsroom manager, I began putting together what I called “the book.”

If I read an article in a trade journal, such as Editor & Publisher, about how a newsroom handled a particular crisis – as a tornado hitting the town, a catastrophic accident, even the death of children, I would tear the article out and put it in “The Book.”

If I could find the actual coverage, that would go in “The Book” as well.

“This Book,” which I lost several years ago, became a library of case studies. I’d read through them from time-to-time. I’d use them as the basis of training. After a breaking news emergency, I’d compare what we did to what other papers had done in similar circumstances.

Case studies are important. They teach what you can do right and what is often done wrong.

In Coast Guard firefighting school, we studied the 1967 USS Forestall fire. The Forestall was a U.S. Navy aircraft carrier. A missile misfired on deck, hitting an aircraft and a gas tank, causing a fire that burned for hours, killed 134 sailors, injured 161 more, and destroyed 21 aircraft.

We studied the fire to identify what could have brought it under control sooner, analyzing those things that were done right and quite a few things that went wrong.

A Problem Doesn’t Have to Be a Crisis

A crisis isn’t the end of the world. Here are the things I learned in the Coast Guard, which carried me through a newspaper career, and on to a public relations career.

On the Coast Guard Cutter Escanaba, we had several chief petty officers and a couple of them were definitely old school. Every time we’d load into a small boat and head over to another boat for a drug interdiction boarding, one chief in particular would yell at us, “Remember your training.”

The day came during migrant interdiction that we had 900 Haitians on our boat. Our crew was outnumbered nine to one. And these Haitians had just been informed they were going to Port-au-Prince instead of Miami.

They were not happy Haitians.

As a Creole speaker, it was decided, “Clay should talk to all 900 of them.”

Nothing prepares you for that, but the chief reminded me I was ready.

As I headed out to the flight deck to eventually calm the situation, my chief grabbed my arm and said, “Remember your training.”