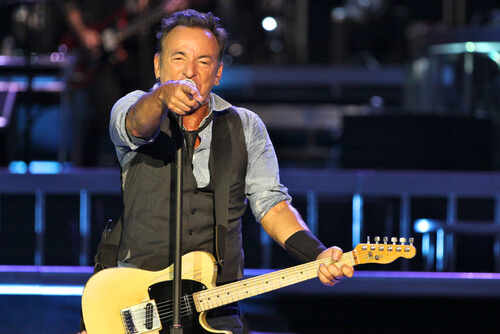 This past weekend, I was chatting with Liana Miller in Slack (my most favorite tool ever!) about the Taylor Swift concert she’d just taken her daughter to see.

We were talking about Taylor being the master at audience engagement. She said every, single person got wrist bands that light up and interact with the music. She thought the technology was cool and fun, but didn’t realize there was another use for it.

I like to see everyone at the concert. This is my way of seeing each and every one of you. When you are dancing, when you are moving, and when you are listening.

And she engaged with the fans…because she could see them.

It’s no secret that I think she is the master at not just audience engagement, but at doing her own PR.

This led us to how much Liana likes to use audience engagement of rock stars as examples of great PR…and to a blog post she wrote a couple of years ago about Bruce Springsteen called, The Boss of Engagement.

I read the post and immediately thought, “Wow. This is great for speakers, t00!”

And then I asked Liana if I could use it in a blog post and here we are.

If you speak—as a paid keynoter, present to clients, present in front of a board or executive team, do any business development, or lead team meetings—this is for you.

(Pretty much this is for anyone who speaks to more than one person at any given time. So read on.)

When it comes down to it, the gist of all of this is that you are present, you are relevant, your storytelling at the end of your speech is as good as the beginning, and you are paying attention to every, single audience member in some way.

How can you implement these five Springsteen tips in your next presentation?