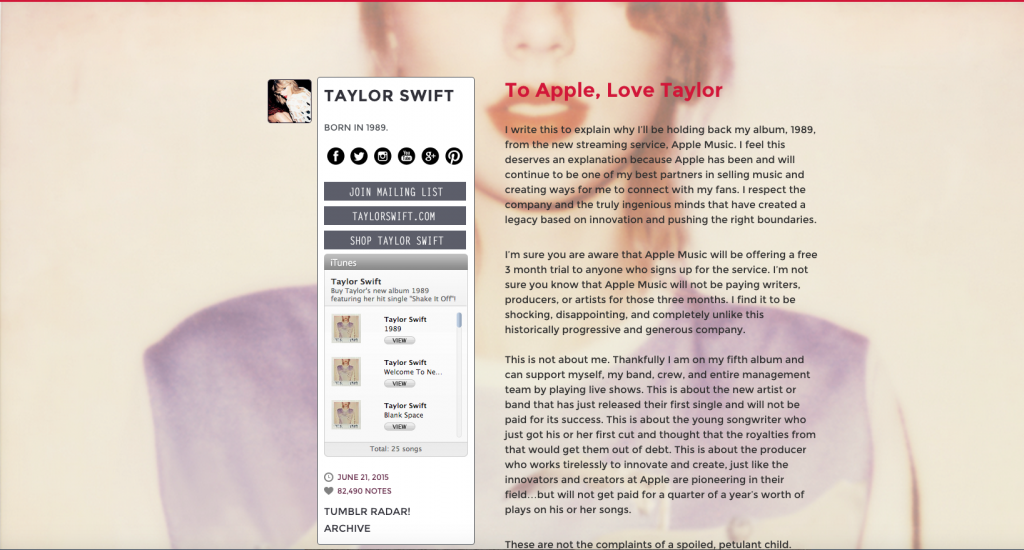 I fell in love a little bit with Dwayne Johnson when I saw him perform “Tay-Tay” on Lip Sync Battle (and then again when he won the world record for number of selfies).

You can’t help but bounce a little in your seat when Shake It Off comes on the air.

I remember being in Boston and Chel Wolverton kept playing it on her iPhone, just to see me sing and dance along. Over and over and over again.

I’m not afraid to admit I love Taylor Swift. I know that probably renders my taste in music horrible, but Tom Webster already established that for me, so I’m comfortable with it.

And not just because of her catchy music, but because she’s a PR savant.

The PR Behind Taylor Swift

We talk about this very thing on this week’s Inside PR.: Taylor Swift is magical when it comes to communications, building a community, and creating extraordinarily loyal fans.

I’m certain some of it is her, but she also must have an incredible communications team behind her.

And that was just for the release of an album.

Since then, she’s continued her quest to keep a highly engaged, loyal community of teenagers and adults, alike (oh don’t pretend you don’t like her!).

Earlier this week, Taylor Swift dashed off an article on Tumblr, where she, according to the Washington Post, “harshly chastised the company for its plan to not compensate artists during a three-month free trial for its new streaming service, Apple Music.”

Titled, “To Apple, Love Taylor,” she describes why she’s withholding 1989 from Apple Music in a very succinct, but respectful way.

(This is important to note because we all tend to get swept up in the social media mob and we forget about respectful discourse.)

She mentions the service will be free for three months to anyone who signs up for an account.

This is lovely for all of us who enjoy listening to music and will add it to our Spotify, Amazon Prime Music, or Pandora repertoires (or, in my case, all three…don’t ask why; I have no idea).

But, during that time, Apple will not pay the artists whose music is listed on Apple Music.

She describes how hard it is for a new artist with his or her new single or album to go three months without being paid.

She goes on to say:

These are not the complaints of a spoiled, petulant child. These are the echoed sentiments of every artist, writer and producer in my social circles who are afraid to speak up publicly because we admire and respect Apple so much. We simply do not respect this particular call.

Imagine, if you will, you worked at a job for three months before you received your first paycheck. But that paycheck wasn’t retroactive. It started to pay you for work done in the fourth month. You worked for free for three months.

Doesn’t seem right, does it?

But the Taylor Swift magic worked and Apple has now agreed to pay its artists during the three-month free trial.

The PR World Has Changed

But that isn’t the end of it for communicators. 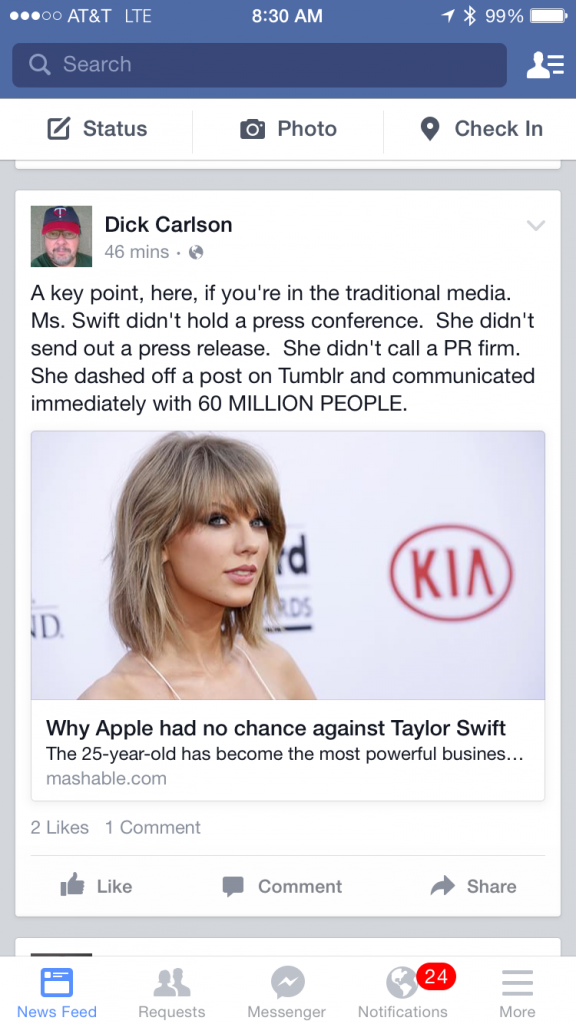 And that is the lesson for communicators.

Taylor Swift has this figured out at the ripe, old age of 25.

What You Can Learn from Tay-Tay

Sure, Taylor Swift is on her fifth album and she’s spent years cultivating a community, but she didn’t have any of this five years ago. She, like the rest of us, had to start somewhere.

Michael Peggs interviewed me for his podcast, You University, earlier this week and he asked me if you can only start with one area in the PESO model, where would it be.

You have the huge opportunity to tell your story, build your brand, create expertise and thought leadership, drive market share, and create ridiculously loyal customers if you consistently create content people care about.

Get really good at content. Then build your shared media. Then paid. The earned media will come from all of that work. They will be calling you for interviews, content syndication, and quotes.

You will have built the public relations mecca. It won’t happen overnight—this is definitely a marathon, not a sprint—but it will happen and it will work and you will be a hero.

The next time your boss, client, or company executive wants you to write a news release with the idea that it will bring you fame and glory, show them the Taylor Swift example.

Now if I could get Jawbone to add me to their board so I can advise on their wearable technology. I may need a few million more Twitter followers first.