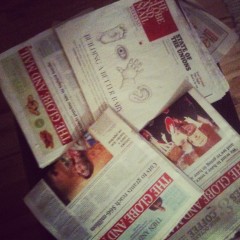 I came out of publishing and tend to be a bit bullish on print in general, and newspapers in particular.

These days, it is easy to ignore newspapers, and there are plenty of signs that the end is near, except for the fact that those pesky things keep hanging in there.

However, the unfortunate fact is, unless there’s been a dramatic shift since I left the newspaper industry three weeks ago, most PR professionals are doing it wrong.

There is a sad irony in the oft-cited circulation declines. Most newspapers have never had more readers if you combine their print and web readership.

John W. Henry, who recently purchased The Boston Globe, noted this very fact in his letter to readers, titled Why I Bought the Globe.

For example, The Globe has a paid print circulation of just more than 215,000, with Sunday being purchased by more than 360,000 people.

However, that is hardly their reach.

Add to it boston.com, with more than five million unique visitors per month, and you have unrivaled penetration in the Boston area.

Now go social. Their main Facebook page has 104,000 “likes” and the main Twitter feed has 257,000 followers. This does not include their brand-specific accounts.

Here’s the rub. These types of numbers play out across the nation at newspapers of all sizes, from weeklies in towns with populations of 4,000, to major metropolitan centers.

So, Why are They in Financial Trouble?

The simple answer is: Advertising.

Where I last worked, our daily newspaper, the website, and the monthly magazine were paid products, but we also published four free weekly newspapers with a combined circulation approaching 100,000.

With the implementation of paywalls, some newspapers are actually seeing circulation revenue growth. My own paper saw year-over-year growth in circulation after I started hitting readers up for money to read our online content.

But it is advertising that is the elephant in the room. As the Pew Research Center’s State of the News Media 2013 report indicates, print advertising at newspapers declined more than eight percent – $1.8 billion – in 2012, and digital advertising growth has not overcome print’s lost volumes.

Even revenue gains from paywalls and digital marketing services fall short of covering print’s decline at the moment.

I’ve been part of the reductions and layoffs, making difficult decisions about who stays and who goes. Related to those decisions are the ones that hurt the newspaper where it matters most. What do you cover and what do you stop covering?

In the 1970s, the American Society of News Editors began conducting a census of newsrooms. By their estimates, this year newsroom population nationally will drop below 40,000 for the first time since the survey began.

During the heyday of the census, newsroom populations were estimated to reach nearly 60,000. The industry is far from dead, and I don’t think it will die, but the declines are very real, and they spell opportunities for you.

What are Newsrooms Doing?

When I was with Gannett, we conducted market research to determine a community’s “passion topics.” These are subject areas the community told us were most important. Like other Gannett newsrooms, we reorganized our teams to focus on those passion topics.

At the same time, our reporters became multimedia journalists. Our fairly small newsroom of 15 reporters and two photographers continued to write stories, but they began to post photo galleries and even local video. A reporter is expected to provide all three, publish immediately online, and then push them through social media.

That is Where PR Pros Come In

As I mentioned earlier, most PR pros know this is opportunity, and most are still doing it wrong. They blast news releases and pitch stories with no local angle.

If you can produce easily sharable local content in a turnkey package, you will get lots of exposure for your clients.

When I was at The Daily News Journal, the Middle Tennessee State University communications team was outstanding at this. They wrote and pitched stories in a news style and provided multiple photos with every story. Sometimes they even included video.

Local stories, photos, and occasionally video that could be embedded online meant tremendous success for MTSU, and it essentially gave us the equivalent of another reporter.

For us, the MTSU communications department provided the day-to-day fodder while our MTSU/higher education reporter could focus on more in-depth stories and enterprise pieces.

In my opinion, papers aren’t going anywhere. But they need local content, not thinly veiled generalized advertisements submitted under the guise of a news release.

Newspapers and newsrooms will still be around for many years, and with a good local content strategy, you (and your client) can become part of that newsroom.